Hello sweet friends – I hope you had a wonderful LONG weekend with Labor Day.  Labor Day the unofficial last day of Summer.  I only wish it was true in the weather department as well.  Because why?  Because it’s still hotter than you know what here in the South.  Don’t get me wrong.  This past weekend was absolutely beautiful – cooler weather, lower humidity and slight winds.  It was *almost* like a wonderful fall day.  In fact, mom even slipped some Pumpkin Spice coffee in there in places.  That just screams fall, right?

Then there was yesterday with daddy.  When we have leftover bread – you know when the bread becomes a rock and you can almost kill someone with it – (snorts with piggy laughter) dad will throw it out in the front yard for birds and other night creature anipals to eat.  You know they have to eat too.  Well yesterday he and mom were fixing to go off so he throws the bread out.  That’s when mom says things got out of control.  It was like the movie Jurassic Park where all of those little pesky velociraptors came running across the fields at people.

That’s right – Chicken Run was back in the hood.  They came running from next door (of course) and tackled the leftover bread like there was no tomorrow.  At one point, mom said she counted EIGHT of them.  Shakes piggy head.  I lost count at two… that is two for a chicken snack on the run – HA!  Nah, I couldn’t hurt the chicks.  I’ve kind of gotten attached to them.  And of course the neighbor stills insists, “I don’t have chickens”.  Okay then.  I guess they just ‘hang out’ in your backyard every day/night.  I guess this brings new meaning to free range chickens.  Snorts with piggy laughter – I kill myself!

Now I want to share a story with you.  A story from the heart.  I know I talk about my humans going off unattended all of the time and them getting into trouble.  But sometimes their adventures don’t end up in trouble.  You see over the long weekend, daddy had a craving for these things called Krystals.  The are little petite hamburgers that are square and wonderful.  Kind of similar (I’m told) to White Castles but mom says they’re better.  I wouldn’t know because I’ve not tried the comparison.

So mom takes daddy to the restaurant and they decide to eat there which they normally don’t.  But mom just had a ‘feeling’ they needed to eat there and she had a coupon for a gazillion Krystals.  Okay maybe not a gazillion but quite a few.  She told dad that it was an excellent buy and she was going to get that many because he could eat them during the week.  Now we all know that women get these feelings called women’s intuition.  You should always go with that feeling – and your first instincts.  So mom/dad are eating their meal and they are done.  They have leftovers, of course.  That’s when a man came into the restaurant that got mom’s attention.

You could tell this man had been through some tough times by his attire.  He went to the counter and they turned him away.  That’s when the light bulbs went off in mom’s head and she starting shaking her head.  She knew now why she needed to eat at the restaurant and order so much food.  The man looked defeated from being turned away at the counter.  Mom got up, walked up front and got another french fry order and large drink.  During this time, the staff at the restaurant had told the man that he had to leave.  Mom said, “No, he’s a paying patron and he’s eating.”  She then invited the man over to dine with her and dad.

You learn so much about people just with a single act of kindness.  This meal made this man’s day.  Mom/dad sat with him and talked with him and laughed with him.  At the end of the meal, he asked how much he owed.  Mom said, “Nothing.  It’s paid in full just by you joining us and making our day with your company.” 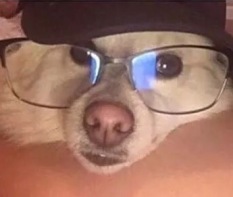 Dear Bacon – I think I’ve lost my writing mojo.  I once was a popular writer.  You might have heard of me, Barky Steinbeck.  I had talent.  I had mystery.  I had a following.  Now it’s gone.  I’m going undercover here to find some action – something to write about.  A good creative juicy novel is what I need.  Any ideas?  Signed Barky

Dear Barky dude.  We had Dragocon here in Atlanta this past weekened.  You could have found enough material to write sequels with some of the want to be characters I saw on the streets and on television.  I’ll tell you this chick called Harley Quinn has my mojo – WOW.  But you know what I didn’t see – dragons.  Dude, it’s called Dragocon – where was the dragons?  Keep looking my friend and don’t use the help of endless whiskey to your next great American novel.  And might I add the beach.  That could be some interesting topics for sure. 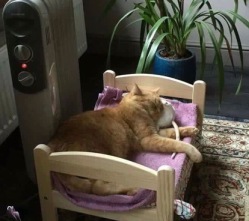 Dear Bacon – Unlike the three little bears, this bed is mine – all mine.  It fits and I sits and sleep.  I couldn’t ask for anything more… well maybe some milk and cookies.  Who doesn’t like milk and cookies before bed, right?  Signed Gingerlocks

Dear Gingerlocks – I know what you mean.  The perfect bed is the perfect rest.  I wouldn’t give anything in the world for my toddler bed.  If cuddles my pot belly and butt oh so perfect for sure.  And milk and cookies – I love the way you think!  I think I’ll go see if I can go find some milk and cookies now for a snack.  Happy sleeps!

Dear Bacon – I have arrived.  Not only did I find my forever family – I found my forever family that believes in dressing alike.  Can you say goal accomplished?  I never thought they would find matching shoes for them – look at the size of their feet.  They can stomp out forest fires!  Do you and your mom dress alike?  Signed Two for Tea

Dear Two for Tea – Squeals with piggy excitement.  Look at you two!  That is the most adorable thing I’ve seen in sometime my friend.  And me and mom dressing alike – well if you count our matching pot-bellies – snorts with piggy laughter.  But mom and that little dog Houdini – shaking head.  They have matching Ugg boots.  Now that is too much. 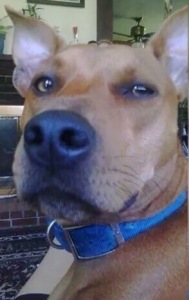 Dear Bacon – I don’t get it.  I walk around my hood and people point and laugh.  Shaking my head in confusion.  I’m minding my own business but of course I’m always looking for food.  I’m always hungry.  Then people stop on the street, point and then laugh.  I don’t get it. Can you help a dog out?  Signed Snooky

Dear Snooky –  Oh my friend.  I’m highly impressed.  Really I am.  I would hang with you anytime in your hood walking the streets.  Don’t worry about what those others think that are pointing at you.  They have no clue to the greatness in their presence.  Really they don’t.  But I have to ask you one itty bitty question.  Are you good at mysteries?

❤ Remember friends – Dear Bacon can’t happen without YOU.  Please continue to email me your letters/pictures. ❤