Dear Bacon – I am the All Mighty Magical Hare.  That’s right – I’m a magician.  I got tired of the human pulling me out of his hat.  It was dark in there.  Now I do the tricks.  What?  You never saw a magical hare before?  There’s lot of us out there that are famous.  You’ll see.  Signed All Mighty Magical Hare

Dear All Mighty Magical Hare – I say go for it my fuzzy little friend!  Why play second fiddle when you can be the main star.  And with that charming red coat – who could see nothing but a STAR?  There are lots of rabbits out there that are famous – the Trix Rabbit, the Energizer bunny, Rabbit from Winnie the Pooh, Roger Rabbit, Bugs Bunny and now YOU – the All Mighty Magical Hare.  I can see your name in spot lights.  I can see you in sold out theaters.  I can see David Copperfield shaking in his expensive shoes.  That makes me wonder.  Who are you going to pull out of your hat my friend?  Snorts and oinks.

Dear Bacon – You see nothing here.  Nothing at all.  There is no dog under this pillow.  Nope. Nada.  Walk on my friend.  Nothing to see here at ALL.  Signed Walk the Line

Dear Walk the Line – You got be faster than that my furry friend.  The evidence is now in the picture.  I suggest you shred these pictures and delete them from your computers.  If you can’t see it, it didn’t happen. Remember those words and tread lightly.

Dear Bacon –  Who says that the little miniature humans are the only ones to have fun on toys?  Is that a rule set in concrete?  I think not.  I made it not.  When everyone went to bed, I jumped and rode a horse.  It was fast.  It was fun.  It was the time of my life until…. I forgot about the motion sensor camera the humans put in the front room.  Can you say busted little guy?  Signed Caught in Giddy Up

Dear Caught in Giddy Up –  Hey, don’t sweat it my friends.  You can only imagine what that camera catches the humans doing.  I’m just sayin’ do a little research for some blackmail in case they decide to put your picture on their Christmas cards this year.  Snorts – Giddy Up!

Dear Bacon – The possibilities are endless.  My brother has the cone of shame.  Sure I feel for him.  Who wouldn’t, right?  But for all of the crap he has given me, does this look give you any enlightenment to the fun I’m going to have with him?  Evil barks!  Signed Some Doggie?

Dear Some Doggie –  Oh no!  I’ve heard about you recently my friend.  You are the one that does all of these bad things to doggies and then dogs get blamed for it.  Some Doggie – you are famous.  I gotta admit that your bro looks a little pitiful.  Maybe go a little easy on him… just a little okay.

Dear Bacon – My humans forgot to feed me tonight. Something about they were tired and sick.  They went to bed early without a second thought to little me and my needs like FOOD.  That’s okay though.  I’ve been sitting up here watching them sleep for a couple of hours.  I don’t plan on moving until they wake up and see me here.  That should give them plenty of nightmares for the rest of their lives and they should never forget about me again.  What do you think?  Signed Pissed

Dear Pissed –  Oh.my.pigs.  Remind me to *never* piss you off my friend…. or to piss off the purr things here.  They may get instruction from you.  If I woke up to you staring at me from above…. I think I would wet myself right there and then in my piggy bed.  Squeals!

REMEMBER FRIENDS – We can’t have Dear Bacon issues without YOU.  Keep your pictures and questions coming to me via email 🙂

Just the facts little guy.  Nothing but the facts.  We’ve been watching too many repeats of the movies Men in Black.  Don’t ask me which is which.  We just like to dress like Kay and Jay.  You know, just for fun and giggles.  The neighborhood doesn’t know how to act when we roll into it – bark.  What do you think?  Do you like to dress up like any of your favorite guys?  Signed Kay/Jay

Oh dudes – I love the look!  That is so neat.  I’ve seen those movies and ya’ll kind of look just like the two.  I think it’s the ties and sunglasses.  I would love to roam around in my costume too.  I secretly want to be a piggy super hero.  I keep asking mom to make me a cape.  I know with a cape, this little piggy would have special powers and be able to fly.  Stay cool barky things!

This little pup couldn’t take it and fell asleep.  When I woke up, there was the hunny jar near me and I was passed out.  I don’t know what happened and I don’t know why it’s so funny.  The humans keep laughing.  Can you explain?  Signed Pup Dog

Snorts – it is kind of funny little man.  Your humans are really playing with you.  It’s cute.  You need to ask the humans to read you the story of Winnie the Pooh.  You look like Pooh.  He liked his hunny.  No, that’s wrong.  He LOVED his hunny.  Hey, I would keep the costume for Halloween.  You’ll get lots of candy!

It doesn’t matter what kind of cat you are, we love boxes.  It’s that simple.  We will get in them and play with them.  I just wanted to let you know.  Signed Kitty Box

I’m not hating you on that.  I know the purr things here at the Hotel Thompson love to play with their boxes all of the time.  Mom/dad area always asking them why buy little purr thing presents when you can just give them the box.  Shrugs shoulders.  It’s a kitty thing.  I completely understand.  I tried to do the box thing too.  I didn’t get it.  I destroyed the box in less than five minutes.  Now that’s my fun time!  Enjoy the box my friend!

I know the purr things like their boxes buy I prefer daddy’s guitar case.  While he plays, I crawl in there and the music puts me to sleep.  It’s actually more comfortable than it looks.  Does your human have a guitar case for you to try this?  Signed Squishy

You do look most uncomfortable.  I think I’m going to let you call this one and let you crawl in.  Dad does have a couple of cases but looking at this body, there is no way I will fit in there.  I don’t care how much I try.  Sleep on my friend!

With summer comes doggy camp.  I thought I would snap this picture of all of us on the bus headed to camp for the week.  It’s a ball!  We get to do lots of neat things and have fun.  There really isn’t any time to miss the humans.  Do you get to go to camp?  Signed Campdoggers

That looks like so much fun!  As far as I get to camp is when I go to nana’s for a couple of days.  She always fattens me up so I can’t oink. 🙂  It’s fun and you know what they say.  What happens at nana’s, stays at nana’s!  Have fun at camp!

Remember Friends – Keep sending your pictures/questions to me at Baconthompson@gmail.com

Piglet Says It ALL –

I think Piglet says it the best when he made this comment above, “Sometimes the smallest things take up the most room in your heart.” Mommy is always telling me that I’m her little Piglet, that I have filled her heart with so much love. It’s hard to believe that I’m only 15 months – mom says that it feels like I’ve been in her life forever and that she can’t remember life without me. That’s kind of a nice thought isn’t it?
Have you touched someone’s heart lately? Tell me about it.
XOXO – Bacon

I read this beautiful saying and looked at the picture and my little heart glowed. I know I talk about my brother, the purr thing Hemi, a lot. How he thinks he is in charge. How you have to bow down to Master Hemi or suffer the great wrath of him. How he slaps me on the butt with his huge hands. Well, you get the picture.

But on the toss side, I do have a heart. I do, at times, show a little love towards the purr things besides trying to eat them – I’m joking. They don’t taste anything like chicken at all 🙂 but they say I taste like ham – weird huh?

But over the long holiday weekend, I was actually feeling a lot of different feelings in my heart. I think I have finally found a peaceful in between in the household with the purr things. Me and Hemi have bonded… bonded to an unbelievable point in our lives. I could continue to explain it but I think it’s best to show you our new found bond. Well, I hope you are ready for this. I know it took mom back too. Okay, steady yourself… here it comes.

I know. I was as shocked as you were in seeing this. Mom said that he crawled right up on top of me which is highly unusual, snuggled down and started purring. I was so warm with his little body on top of me.  Mom said that we slept like this for over an hour.  She sat right beside us and watched us while she was watching television and doing stuff on her iPad.

So this proves without a shadow of a doubt that I do love my purr things.  I grew up with them and they are my family.  When mom adopted me at 3 weeks, she started mixing us together so we would get used to each other.

Sometimes the purr things sneak into my room and we all get in bed together to watch my television shows.  I know – unbelievable isn’t it?

Mom says that this second picture of me and Hemi, it actually looks like Hemi is hugging me.  I knew that little butt kicker loved me.  I don’t care what he says.  In fact, I think he likes my bankie as much as I do.  I’ll share it with him… for a while 🙂

Everyone have a wonderful Thursday.  Mom says that the end of the year is almost here.  Not really sure what that means yet.  I’m sure she will explain it more to me later. 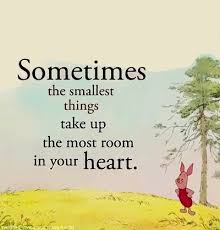 My mom told me this last night.

She said that I may be small but I fill her heart with so much love.  AAAWW – I love her too.

So, fellow pets – the next time you’re with your parents make sure to give them extra snuggles and think of what piglet says, “Sometimes the smallest things take up the most room in your heart!” 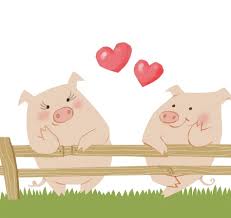