ooohh shivers to mergatroid!  Mom/dad have been watching the Investigative Discovery (ID) channel way too much these days.  I think maybe this little piggy has even gotten addicted.  It’s not hard either.  You just get caught up on all of these ‘who done it’ shows and they are so very interesting!  AND, you can’t just watch one show and that’s it.  You have to watch several shows at a time.  And there are so many different ones on this channel!  It’s a little piggy paradise on crime.

There’s a new show on this channel that actually started last Tuesday.  It’s called Swamp Murders.  WOW – the first show was a kicker and so out of the blue.  I had no clue who was the murderer until the end.  It definitely kept me on my hooves the entire time.

Tonight’s episode (06/11/2013) is going to be a real kicker.  It’s called Chain Reaction.  The television blurb says this about it.

When two women are discovered in the depths of Georgia’s Flint River, detectives wonder if a serial killer is afoot. But when they connect the two victims, investigators follow their lead to the discovery of two more corpses, and a whole slew of betrayal.

There’s an interesting tidbit about tonight’s show.  You know about the mystical and magical place in my back yard at the Hotel Thompson?  Not too far in the back, the Flint River runs through it!  Shocker!  I’ve been telling you there are things that go on back there.  This little piggy will be glued to the television at 10:00PM to watch this show tonight.  Who knows – it could have happened close to where the Hotel Thompson sits.  Insert scary music here – 🙂

Some of My Favorite Shows

I love Porky Pig.  I’ve been watching different cartoons with Porky during the day and at night sometimes when mommy puts me to bed.  He’s so funny.  I would love to be like him one day.  I bet looking at the pictures you can recognize some of the cartoons.  I wonder if they can make a cartoon out of me?  I think I would be perfect.  And what about that fine looking Petunia Pig?  She is cute and sassy too.  I think that Porky and Petunia were a cute couple. 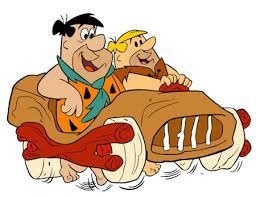 I also LOVE The Flintstones,

especially the ones with Mr. Gazoo.  He was hilarious in his antics.  Barney and Fred always got in trouble with him.  He was so much fun!  He was small too – fun sized packaging I like to say.

And my favorite show that I’ve been catching up on lately… Gilligan’s Island.  I’m finding this show very intriguing.  I really can’t pick a favorite character – all of them have something to bring to the table as far as being funny.  I would like mom to buy all of the DVD’s for me to watch.  I can watch them over and over.  I think it would be a hoot to be stranded on that little island with everyone… just so long I didn’t become dinner.  🙂

What are some of your favorite old school shows that you like to watch?

Oh and by the way, my favorite television show comes on tonight. Wipe Out is the best. I would love to try to run that obstacle course. I think I could do better than some contestants. In fact, I think I’m off to write a letter now to apply to be a contestant. Keep your hooves crossed for me.