I Know How To Play

Where there are matters of food, you can so find me. I love food. Can’t you tell? It takes a lot of hard work to maintain this wonderful pot bellied figure.

Mom has a thing for Lifesaver Gummies. She bought the bigger bag at the store so that she could introduce them to her favorite, ME! PLOL (Pig Laughing out Loud). 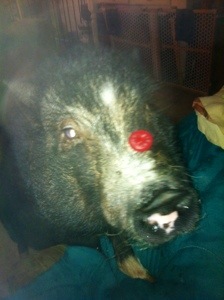 Well mom even went the extra step and said she was going to try something new with me. I’m not a dumb pig. When she says that, there’s going to be lots of extra food for training – snort – YES!

Mom gave me a gummie Lifesaver and what do you know – I loved it. She then proceeded to put one on my snout. She was telling me, “No, no, not yet.” I listened to her because you know more treats for me!

Then she said I could go for it. I couldn’t flip that thing off of my snout fast enough into my mouth. It was so good and juicy!! Have you ever put anything on your nose and flipped it into your mouth? Daddy was laughing at me because he said one time at a restaurant with mom he put a clam on his nose and flipped it into his mouth. See, if the food is good – they will come.

Aaaww – these are the good times! XOXO – Bacon

An Okefenokee area ghost tradition, this one dating to the 1930s, owes its existence to the railroad. A man fishing along the tracks at Henson Creek, near Manor, fell asleep one night with the rails as his pillow. A train appeared, sounding its whistle frantically, but there was no response. Steel wheels kept on rolling, and the fisher person was high landered.

Now for a twist. The legend is that the body can be seen walking the rails at night swinging a phantom lantern in search of its head. Kevin Dial claims that his grandfather went in search of the “shade” one night. Sure enough, it approached, solid white and six feet tall, walking directly toward Gramps, who fired a futile shot before fleeing.

Oh Boo my friend.  This afternoon I have another real story for you about a mummy.  I heard about this story early last year and couldn’t believe it.  Since then, we have even her it mentioned on television.  Enjoy my friends – I’m here to hold your hand or paw if you need me 🙂

In 1976, a camera crew was filming a television show inside of a haunted house in Long Beach, California.  When they were setting up, they moved a mummy prop to the side.  When they did this, one of the arms fell off.  When the arm fell off, they noticed that it was actually real human bones.  After the authorities were called in, they learned that the body was the criminal Elmer McCurdy who was killed during a shoot out following a train robbery.

After he was shot, a funeral director embalmed his body and put it on display since he was so proud of his work.  Eventually a pair of carnival promoters claiming to be McCurdy’s brothers took the corpse for themselves.  McCurdy’s corpse popped up in many haunted houses across America before winding up in Long Beach, California.

ds!  We here at the Hotel Thompson have been watching a new game show on television called Bullseye.  It is hosted by Kellan Lutz – you know him from Twlight (he played Emmett Cullen) and co-hosted by Godfrey who is a comedian on the Godfrey Complex.  This show is a combination of Wipe Out and Fear Factor.

It starts with 8 contestants (4 women and 4 men).  They have to go through three challenges.  By the beginning of the third challenge, they are down to 3 contestants to go up against each other to win $50,000!  So you think it’s easy to play?

They have different challenges that I’ve seen in the past couple of weeks.  One challenge had the contestants running down a MOVING train from the caboose to the engine.  Along the ways, they were throwing off bullseye’s that were attached to the side of the train.  Then they rushed to the front of the train and jumped off to hit the big bullseye to stop the train.  Don’t worry – they were all tied so they wouldn’t fall off the train or jump to far in front of the train to stop it.  But can you imagine doing this?  The quickest one that got all of the bullseyes removed, won the $50,000.  Not bad for a days work huh?

I’ve also seen it where they are attached to a cord hanging off of a helicopter.  They are swung through the air and have to throw big bean bags towards a bullseye on the ground.  They get two attempts and the closes bean bag to the bullseye target wins.  Sound fun swinging through the air?

The show airs on the Fox channel on Wednesday nights at 9:00 PM.  Mark your calendar to watch it this week.  We highly recommend it here at the Hotel Thompson.  In fact, I think I’m going to practice hitting some bullseye targets this week… where are those purr things to help me out?  Snorts!

Oh friends – it’s that time of the year again.  Fantasy in Lights happens not too far away from us at Calloway Gardens in Pine Mountain, Georgia.  It’s really a must see for the Christmas season.  Something about going out at night, riding the Jolly Trolley throughout the park, seeing all of the beautiful lights in awe.  ❤ it – I mean heck what’s not to love right?

Fantasy in Lights at Calloway Gardens has been taking place for more than 20 years – it’s among the top 10 light shows in the world.  Did you know that they have more than 8 million lights throughout the park this time of the year?  All of that shiny holiday spirit – 🙂

So mom and dad go and got lucky this year on the Jolly Trolley.  They got front row seats together.  There they sat all bundled up in their coats, coffee cups in hand and anticipating a wonderful show like always.  Trolley’s have a driver and a conductor that talks about what is coming up and what to expect.  The night mom and dad went, their conductor was Samantha.  She was nice wonderful lady.

There is one spot that the trolley rides a bit before the show begins.  Samantha thought it would be a nice touch for all of us to sing Bing Crosby’s White Christmas.  Major feat but they can do this!  So they start, “I’m dreaming of a white Christmas…”  Well daddy goes bah-bah-bah-bah in his best Bing Crosby voice out of the blue.  Mommy says it was like a wave of laughter that started in the front of the trolley and then rolled all the way back.  Finally the conductor was laughing so hard she said, “We have to switch songs now.”

Shakes piggy head.  Those two humans of mine can’t be trusted to even go out and watch the lights.

WITH A PINK PIG!

I’ve heard daddy talk about this pink pig downtown.  I’ve been slightly intrigued with the thoughts of meeting a pink pig.  Yesterday while watching the news with daddy in the afternoon, I saw it on television.  OMP (oh my pig!).

You are probably asking yourself what the heck is the little miniature pot-bellied pig rambling on about?  I’ll tell you.

In downtown Atlanta for more than 50 years, Atlantans have started their holiday with the tradition of riding the Macy’s Pink Pig.  The Pink Pig is a train on top of the Lenox Square Mall.  It is held beneath a 170 foot 1950’s themed Pink Pig tent.  Kids of all ages come and ride the train – yep all ages.  That includes my daddy who acts like he is five – snorts.

The Pink Pig is called Priscilla – hubba hubba.  The Pink Pig train goes through the tracks of a life sized storybook with characters like Priscilla and her friends.

Daddy says that he remembers riding the Pink Pig when he was a child.  Unfortunately, mommy never did 😦   I told mommy that I would give her piggy back rides around the house but she said it wasn’t the same?

But this year, daddy says he wants to change that.  He wants mommy to be able to ride the Pink Pig and be part of a southern tradition here in Georgia.  Aaaww – isn’t that sweet?  Personally, I think daddy just wants to be a child again and ride it himself – snorts.  I wonder if they will let me ride it?

Do you have any traditions where you are that kind of starts of the holidays for you?