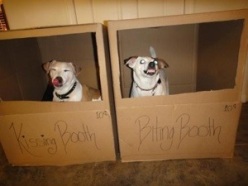 Dear Bacon,  Our parents are so funny.  We are brothers born on the same day in the same litter. Our personalities are like twins though – we both have separate ones.  Our parents thought it was funny to put is in these contraptions.  But don’t worry.  I’ll be showing them what I think about this set up shortly.  Barks!  Signed Sitting Pretty in the Booth of Shame

Dear Sitting Pretty in the Booth of Shame – I have to admit something my friend.  Think of the originality that your humans came up with on this set up.  It’s outrageously funny.  Okay may not so funny from the side you are sitting BUT from the other side of this computer where I’m sitting – it’s hilarious!  I say play it for all it’s worth and have some fun.  You can always leave something in your humans shoe for payback later 🙂

Dear Bacon – I had surgery and as you can see I had to wear the cone of shame.  Shakes dog head and whines.  The cone of shame!  But look I’m not sad – I’m happy!  My master – he’s the best.  He made a game out of it and threw in all of my closest friends.  See, I even thought about you with Super Piggy in the front.  He reminds me of you.  What surgery?  I know no pain here.  Signed Happy Doggy

Dear Happy Doggy – Oh pal!  Where were you when the little guy here had surgery. This would have been fantastic for him to wear his cone of shame and have some fun.  Your master is tops in my book my friend.  I say when he has surgery, you do the same for him!

Dear Bacon – What?  I was tired from working the hood the night before.  See I’m on the neighborhood watch.  I gotta make sure I protect all of the humans from the bad peeps that come out at night.  The local diner takes care of me.  I need coffee STAT – and hey why don’t you make it a double and serve it with some eggs and a steak?  Signed Neighborhood Watch

Dear Neighborhood Watch – You are the DOG my friend.  I like how you take care of your hood and they repay you at the neighborhood diner.  I gotta get a gig like that.  Where do I sign up?  PIGGY POWER! 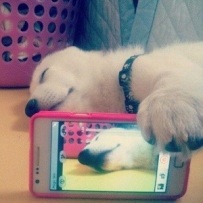 .
Dear Bacon – Using Facetime on these i Phones are the bomb!  See my girlfriend and me were talking.  We could see each other and it was a blast.  Neither one of us wanted to hang up.  We both fell asleep like this.  Isn’t she adorable?  Signed Beef Cake

Dear Beef Cake – hubba hubba.  She is a dish my friend.  I know exactly what you mean about Facetime and talking to friends not wanted to hang up.  My pet rock here Bashful has been doing a LOT of that lately with some of his friends.  Modern technology has come so far, hasn’t it?  Just remember to block the picture when you go wizzy.  No one wants to see that – it doesn’t matter how much in love you are. 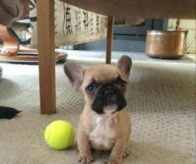 Dear Bacon – Please explain something to me.  This yellow ball – why do the humans throw it and then expect US to retrieve it back to them?  I mean heck if they want to play fetch, shouldn’t “I” be the one throwing it for them to fetch?  That would help in their exercising… right?  Signed Confused

Dear Confused – You know what friend.  You have a wonderful point on fetch.  I understand this completely.  Humans do say they are playing ‘fetch’.  I think we should try it your way.  Throw the ball for the humans and let them fetch it.  We shall see how long that lasts.  If it’s my dad, maybe 2 minutes tops – snorts and rolls with piggy laughter!

REMEMBER friends – Dear Bacon can’t happen without YOU.  Please continue to send me your letters and pictures via email.  Snorts and thanks!

Can a Piglet Get Some Computer Help Please??

Yes, first of all I did call myself a piglet.  I will always be mom’s little piglet because you know I am the youngest here at the Hotel Thompson 🙂

Most importantly though, I have a really important computer question.  These humans here, they are computer challenged to say the least.  If it wasn’t for me posting, they wouldn’t even know how to turn the computer, laptop, i-Pad or i-Phone on.  My work is never done – snorts 🙂

Back to the question, on some of ya’lls blogs you have where you can sign up for email notifications when a posting goes out.  Help a pig out here please.  How do I set this up?

I am thanking you in advance because I *know* that ya’ll rock and will know the answer.

Thanks my friends!  It’s raining here – I’m off for a piggy power nap!