Today, we have a really special tribute.  Today is Friday the 13th – cue scary music!  Do you know that there is only ONE Friday the 13th in the entire 2014 calendar year?  That makes this day extra spooky and scary.

Do you have a fear of this day?  Are you superstitious?  Here in the United States it is thought that bad luck falls upon you on Friday the 13th.  But did you know that in Spanish speaking countries, Tuesday the 13th is a superstitious day for them and considered bad luck.

Many hotels and tall buildings even skip the 13th floor… just in case of bad luck.  It’s also bad luck to have a party with 13 people… have you read Agatha Christie’s book Thirteen at Dinner?

Did you know that fear of the number 13 is called triskaidekaphobia while fear of Friday the 13th is known as paraskavedekatriaphobia.

Did you know that President Franklin D. Roosevelt suffered from triskaidekaphobia?  He wouldn’t travel on the 13th day of any month and don’t even think about having a party with 13 guests.

Some people even think that Friday the 13th goes back to Adam and Eve in the Garden of Eden.  Supposedly they think that Eve offered Adam the forbidden fruit on a Friday and they were then cast out of Paradise.

And think about the movie marathon we are going to have tonight here at the Hotel Thompson.  Not listed in any particular order but you know we are going to be watching some gory horror flicks to include:  Nightmare on Elm Street, Paranormal Activity,  Saw, Psycho, The Shining , It and of course Friday the 13th.

I’m off now. I’ve got to go cross my hooves.  Avoid some black cats.  Not look at the moon through a pane of glass and throw some salt over each shoulder.  Be careful my friends 🙂

<<Insert scary music>> Snort – mom said that today was a scary movie kind of day.  Friday the 13th brings out the fear in people.  She says it’s always brought her luck and good fortune.  We’ll see what kind of day she has.  I know it’ll be good because she started her day with me – her lucky pig.  I snuggled with her because she was sad about something that happened last night.  I’ll tell you all about that in a later post – snort. 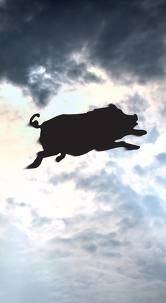 So, I’m making my own superstitious kind of Friday the 13th.  Look for the black pig flying in the sky.  If you find one, then hey it’ll bring you bunches of good luck.  Kind of like a leprechaun with the rainbow.  Yeah, that’s it – let’s make this a new folklore that we can look to and share with people starting now and in the future.

What do you think about that?