Dear Bacon,
Do you ever question yourself to as whether you’re coming or going? Me and my brother have asked ourselves that a lot these days. So much so, that the master thought it would be fun to take this picture. Signed Running Circles

Dear Running Circles,
That’s a great visual. I do run in circles very often. Usually mom helps me out though and puts me in the right direction.  That is an awesome picture of you two together.  You are so lucky to have a brother.  Sometimes I wish I had a biological brother besides the purr things.  Could you imagine what life would be like with two of us?!  We would rule the world!

Dear Bacon,
You’re not the only one a little spoiled by the humans.  Every night, we all get ready for bed and hang out. Aren’t my humans the best? I set up the camera and took this shot last night.  Signed Three’s a Party

Dear Three’s a Party,
Snort laughing. That is so hilarious! Yes humans are the best if they allow that nightly. I on the other hand appreciates my independence of my own room…with my own television and my own bed. Not that I’m spoiled or anything like you.  And, I think you got your signature wrong.  I think it should be Three’s a Crowd.  Snort.  Happy sleeps!

Dear Bacon,
The humans told me that I had to take a bath.  They also told me that I didn’t have to get in the tub. I never thought the alternative would be a tub in the sink. How humiliating!  Have you ever? Signed Suds

Dear Suds,
WOW. I haven’t seen that much bubble action since mom took her last bubble bath in the big tub. That’s a lot of suds. Baths aren’t that bad.  You need to live up all of that attention.  Enjoy the sauna experience little guy.  Don’t fight something that is going to happen with or without your participation. 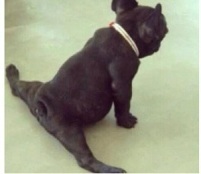 Maybe you are or maybe you’re not familiar with this look. I like to do it when there is a lot of people in the house. That makes me the center of attention. Wink – Signed, Splitsville

Dear Spiltsville,
That is really an accomplishment. I think I have done the split in the kitchen on the linoleum several times. Not that I was trying to but these hooves have a tendency to slide on slippery surfaces. I’m sliding so bad in the kitchen that mom finally put a huge sheet on the floor for me to waddle in to help her cook.  That way that move doesn’t happen to me.  Way to go with the thinking of attention. Two hooves up partner!

❤ Remember friends – Dear Bacon can’t happen without YOU.  Please send me your letters and pictures to my email ❤