Leave It To My Mom – How Original

My mom – she is definitely different.  I think she swims to her own tune – trust me on that one.  You know that she has the Smart car Albert but she also has another car.  She has an Equinox called Tank.  Most of the time, she drives Albert but there are the days that she wants to drive a bigger car – like Tank.

Here’s the problem.  If she parks them in the driveway back to back, then she has to move them around when she wants to take one over the other.  Cause you know, there’s no parking on the grass – rolls piggy eyes.  We can’t hurt that dreadful grass.  Ideally, it would be awesome to get the driveway extended out a bit.  That’s what daddy would love to do.  But until then, the problem persists.

So mom, she came up with a solution as you can see from the picture below.  She parks Albert sideways and parks Tank straight in the driveway.  That way, she can take either one without having to play hopscotch cars.  How original is that?  Of course, she has to drive Albert on the grass on the other side of Tank but there are actually bricks on the yard on that side that you can’t see with this picture.

But you want to hear the funny thing about mom’s originality?  She’s been doing this for a while and it’s catching on in the neighborhood.  Now you can see other households doing the same thing.  Snorts. 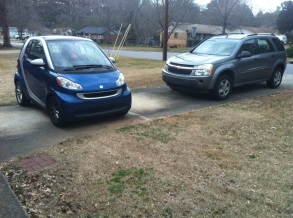