Really mom?  It’s not enough that you and daddy left all of us anipals and went to Chicago, Illinois.  But now I find this video on your phone that shows me ya’ll were having fun without me?  Really, how could you?  Then again, I’m not a trained dog like Sherlock Bones.  I don’t ‘catch’.  That’s only for amateurs – snorts with piggy laughter. 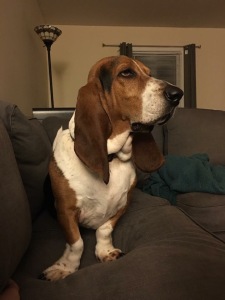 Hello friends of the Hotel Thompson.  This is Sherlock Bones reporting in from Chicago, Illinois.  Do you remember who I am?  I am Bacon, Houdini’s and Hemi’s cousin (my mom is Bacon’s mom’s sister).  WOW – that’s a lot to follow isn’t it?  Well guess what?  The gang’s mom/dad are not at the Hotel Thompson.  The gang of anipals are at Nana’s for a couple of days.  Why do you ask?

Because I have kidnapped them and they are magically here with me… and my two purr things – Poseidon and Marmalade.  Trust me, we are all taking good care of the pawrents.  We won’t let them get into too much trouble… but considering Bacon’s dad I think that asks for way too much, right?   And we all know where Bacon’s dad will be.  At any spectacular restaurant he can find – howls with laughter!  So stay tuned next week.  I’m sure there will be lots of details to spill.

Travels in the South 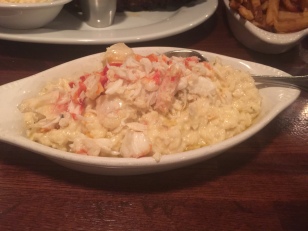 Doesn’t this look amazing?!  It’s on the menu under shareable sides called King Crab Risotto.  It looks mouth watering and out of this world!  The risotto was creamy and the crab meat sweet and tender.  We all got some of this delicacy.  Mine was great.  However, my hub unit’s first mouthful was full of shell.  WTH?!  It would be the blind guy getting shell.  So we thought it was just a chance thing.  That’s when all of us starting getting shells in every bite.  We had a collection of shells by the time the waitress came by to check on us.  The waitress was concerned and brought the manager over to talk to us – we didn’t ask for him.  This is when you can tell the difference in an upscale restaurant.  He immediately was taken back by the amount of shell’s in our King Crab Risotto.  Yes, there might be an occasional shell due to the amount they are putting out but *never* something like this.  He was very apologetic.  Would we get it again?  Absolutely!  Never make a judgement on the first time – we will definitely try it again.  Stay with us next week to see what else we ordered here.

Posted by Piglove on 03/14/2018 in Travels Around the World, Travels in the South 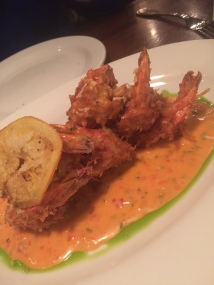 Like in this picture.  This is an appetizer called Coconut Crusted Shrimp.  It is settled in a bang bang sauce with a basil oil.  A little spicy on one hand but delightfully sweet on the other hand to balance the shrimp.  And that is also a piece of fried lemon on top of the shrimp.  It was a wonderful way to start the meal.

It Wasn’t Me… This Time

Every once in a while, I get a story that I just *have* to pass along.  This is one of those times.  It is way too funny for sure.  Many of you know that my cousin Sherlock Bones lives in Chicago, Illinois.  Sherlock Bones is 5 – like me – and he’s a Basset Hound.  Awesome cousin for sure!

Mom is sitting on the couch last night watching television and she gets a text from her sister, my Aunt Tina.  Mom reads it and then starts laughing.  So of course you know all of us anipals have to go up to mom and ask her what’s so funny.

ina bought a pizza for the family last night, put it way back on the kitchen counter and went for a quick run through the neighborhood.  My cousin Maverick had went to the bathroom to wash up and was going to eat when he was finished.  In the meantime, guess who smelled the pizza?  If you said Sherlock Bones, we have a winner!

Somehow Sherlock learned how to reach further back on the kitchen counter and helped himself to some dinner. 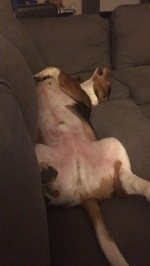 He then proceeded to stash three more slices of pizza in the sofa.  You know so he could have a midnight snack.  The dog has skills.

I’m thinking that one day when I grow up I can try to be like him… looks down at my miniature pot-belly and short legs, okay maybe not.

After his dinner, he stretched out on the sofa belly up full from his adventure. 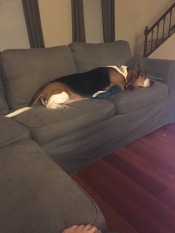 Texts went back/forth between mom and Aunt Tina – all full of sarcasm and fun.  Then Aunt Tina sent the final picture of Sherlock Holmes laying on the sofa all sad.  Why was he sad?  Because he spent a solid ten minutes looking for his ‘stashed’ pizza in the sofa and couldn’t find them.  He could smell them but they were gone.  Aunt Tina had found them and removed them from the sofa.

I guess Sherlock Bones was so heartbroken. 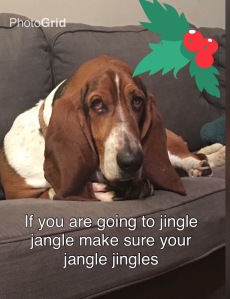 Hey friends ❤  How was your week?  We survived another week and I’m proud of that.  We got everything wrapped and mailed out for Christmas – yay!  And this past Saturday we had one last time shopping adventure on a different side of town.  We spent the entire day store hopping, having a blast and laughing.  Isn’t that what the holidays are about?  It was a blast.  Of course, one of the funny things that happened (there’s always more than one with us, right), was that we were shopping on the ‘country’ side of our town.  I guess you could say it was redneck land – LOL.  Well, I’m in a store and I asked the lady at a jewelry counter if they sold nose rings.  OMP!  The look on her face was priceless.  I personally was laughing my butt off at her shock that I had one.  Priceless my friends – priceless.

So this week friends, I leave you with some important information from nephdog Sherlock Bones – If you are going to jingle jangle make sure your jangle jingles.

How was your week? 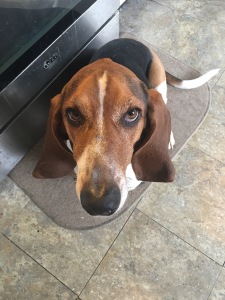 Hello blogville.  Sherlock Bones reporting in on Door Watch 2016.  Last night, there were some rumblings going on behind the door.  That little freak Don Juan is moving around.  I can hear it and I can smell him.  He smells like a mixture of Peppermint and Pine.  What an odd combination for an elf, you think?  I know he’s up to something but so far he has not left his compound and the safety of his hole in the wall.  But it’s coming.  I feel it in my bones.

My watch continues.  And to those that have Elves remember – they are starting to move around a bit.  The day after Thanksgiving they hit with all of their powers.  Be safe and be careful!  Report to me if you hear or see anything out of the ordinary.