Dear Bacon – I’ve made a grave mistake.  There was a hole in the back of this contraption.  I crawled in and when I did, it shut closed.  Now I’m stuck… I feel like a squirrel on display for the world to see.  The birds are pointing and laughing at me.  What am I to do?  Help?  Signed Mannequin Squirrel

Dear Mannequin Squirrel – WOW!  What can I say?  You do look awesome with your mannequin display.  I can say perhaps you should enjoy what you can… maybe take a seat and a quick bite of that delightful feed.  By the time you get done with your dinner, maybe the owner of the house will see you in your tight spot and help you out.  If not, can you jump and push the top off for a quick escape?  And don’t worry about the birds pointing and laughing.  Might you remind them that you have plenty of food to eat while you wait unlike them – snorts.

Dear Bacon – We like to put the warning out there for the humans.  If you cross the metal gates leading into our kingdom, be warned.  You will experience a death like no other from the ankles down.  We may be small and short but we have sharp teeth like a shark.  Just sayin’.  Does your little brother do the same?  Signed Harley and Davidson

Dear Harley and Davidson – Awesome idea my friends.  Truth is in the advertising.  If peeps are dumb enough to cross that warning, their ankles deserve what they get.  And yes.  Houdini has the sharpest teeth that I’ve ever felt.  That’s right – I said felt.  I feel them when he tries to hang off of my piggy tail and swing back and forth like I’m an amusement park.  The little guy has no respect for this pig – he thinks I’m his personal jungle gym. 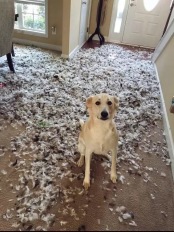 Dear Bacon –  Honestly.  I was asleep the entire time that the master was away.  Really I was.  When I woke up, the front room cushions exploded.  I didn’t hear a thing!  Exploded I tell you.  Of course, I’m getting the blame.  But really it wasn’t me.  Signed Lab Shredder

Dear Lab Shredder – Darn those dust bunnies for striking again!  I believe you my friend.  I really do.  Dust bunnies sound cute and look kind of cute but all alone they can be little vultures that wreak havoc all over the house blaming us anipals.  Shakes and shivers from fear.  They can’t be trusted at all.  No way!  I say you need to hunt them down one by one and take care of them.  As far as you getting the blame for this.  If it wasn’t on video and there is nothing concrete showing you did it, I say they have to let you walk my friend.  No evidence means NOT GUILTY.  Lowers my hammer in my court room and says dismissed. 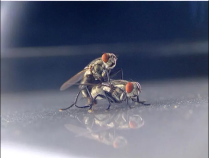 Dear Bacon – It’s really not what it looks like.  Me and my friend were playing leap frog.  We see frogs do it all of the time and we thought we would try it.  We turned on the camera and started.  We posted this on Instagram and everyone went crazy saying that we were multi-flying.  No honestly we weren’t.  We were just playing a game.  What do you think?  Signed Doris and Rock

Dear Doris and Rock – Snorts with piggy laughter.  Whatever you kids are calling it this day, sure.  Just be safe my friends.

Thank you so very much my friends for making Bacon’s Show and Tell a great place to be every month.

This month for Bacon’s Show and Tell we are going to highlight what else but something embarrassing on your humans – snorts with piggy laughter!  Has your humans ever did something so embarrassing to each other that to this day it still stands out?  A joke?  Something that was suppose to be serious but turned out hysterical instead?

This month – I’m giving it to my mom for her tale – hope you enjoy it my friends – snorts with evil laughter.

This happened many, many years ago when I was still single and I was living in my first apartment.  After years of throwing rent out of the window, I decided that it was time to invest in buying my first house.  Jim of course said he would help me with the packing – so nice of him.  He came over after work one day and as I boxed items up, I would tell him what was in them so he could tape the box and write on the outside the items enclosed – you know the typical moving fashion.  He would then stack all of the boxes in my living room awaiting to be moved to their new home.  This went on all day long and we finally got everything boxed up – I was so happy!

The day of the move came and one of my girlfriends husbands owned his own company.  He got his staff to come over and move me down the road to my new house.  As they were moving the boxes, I heard snickers and laughs but I didn’t think of it.  As we got to the new house and was unloaded the boxes, I had them place them all in one of my spare bedrooms so I could unpack them at a later time.  Again, here was the snickers and laughter.

Oh my friends something has happened.  Something BIG.  Do you hear me – B.I.G.  And it happened to Houdini.  But I’m getting ahead of myself as usual.  Some of you have missed mommy on

your blogs, texts or emails.  You see mommy has been sick for a couple of weeks now.  In fact, last Sunday mommy had to go to emergency care.  She has been feeling icky and had this horrendous cough that just wouldn’t go away.  The cough was so bad Sunday that she couldn’t catch her breath and she passed out.  It was early morning and we were all asleep except for her and Houdini.  Fortunately Houdini woke her up by jumping on her and licking her face.  After that, mom and dad went to the emergency care.  After a lot of tests, x-rays, a breathing treatment and an EKG for safety, mom was diagnosed as having severe bronchitis.  She came home that afternoon with lots of medicines and has been resting every since.  We are all taking turns checking on her and nursing her back to health.

I tell you all of this so you know where mommy’s head is – sick in a cloud.  Fast forward a couple of nights ago and little Houdini was playing in the front room with mommy watching from the couch.  Let me show you a picture of how cute, small and adorable he is 🙂  You’ll thank me for this picture in a few minutes.  I promise you.

Houdini was playing with his puppy – it’s a stuffed teddy bear.  He was pouncing at it, barking at it and pretty much attacking it like he normally does.  He looks like he is well… how shall I say it… humping it.  There you go – snorts.  Last month mom talked to his vet about the humping part.  The vet assured mom that it really wasn’t that but more of a domineering kind of thing of who is in charge.  Do you see where I’m going with this story?  Hold on – it gets better.

So, there he is in position ‘playing’ with his puppy when all of a sudden he whines and looks at mommy deep afraid.  Well that got mommy off of the sofa in no time flat and also woke me up to look and see what was wrong.  When she looked at Houdini, it looked like he had something stuck to his butt.  Mommy thinking was that maybe he had a little poo stuck back there and couldn’t get it out so she was going to help the little guy out – see what mommy does for us ❤

Well, she walked over and picked the little guy up, flipped him over and son of a nutcracker it wasn’t a piece of poo. She immediately told daddy that Houdini was broken.  Wacks my forehead with my piggy hoof – broken?  Mommy had no clue.  No don’t get me wrong.  My mom is a smart woman but she had no freaking clue of shall we say Houdini’s ‘manly’ parts.  We all started laughing so hard that daddy almost fell off of the sofa.  Poor mom – she was shocked that her little baby is now a man.  But then you should have seen Houdini’s face as well – he was scared.  He didn’t know what was happening.  And daddy was no help because poor mommy was out of it.  There she was holding Houdini with all of his junk exposed, she’s sick and coughing, worried about her broken baby and we were no help.  Daddy finally found his voice and told her what it was.  Mommy’s response?  Priceless I’m telling you.  She said quote, “Well it’s been so long since I’ve seen one.”  OMP (oh my pig)!  And then – OMP – wait for it and remember mom was on medication.  She said, “Oh my goodness.  I have the John Holmes of puppies!”  That’s when I lost it and started snorting and rolling on the floor. 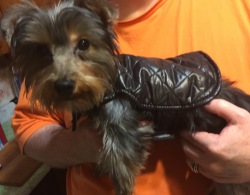 Daddy never to miss a beat said, “Well what did you expect when you bought him his first leather jacket this past weekend?”  Oh have mercy!  I know this is something so simple – a part of nature if you will – but it was so hilarious with mommy being sick and taking medication.  It was definitely a priceless moment.

And yes, things did finally straighten up if you know what I mean – snorts.  She finally handed Houdini to daddy and told him it was that time for the boy to man talk.  So, daddy tucked Houdini into bed that night and he, me and Hemi got ‘the talk’.  Lord have mercy so that’s what that is – snorts and rolls around laughing.  Have your parents had ‘that’ talk with you yet?  My tummy is hurting from laughing so hard.  Gotta stop now.  Take care my friends!