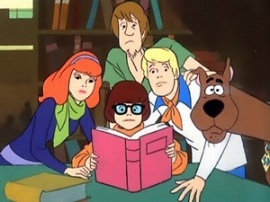 Day 24 of my 31 Days of Spook here my friends.  Count Baconula reporting on a show that has withstood the test of time – Scooby Doo.  Who can resist Scooby Doo??

This picture to the left was from the first episode of Scooby Doo, Where Are You!.  The show was titled What a Night for a Knight and came out in 1969.  Do you know who is a big fan – no HUGE fan – of Scooby Doo?  My mommy.  She has every animated episode, every film and even some knick knacks around the Hotel Thompson.  AND, did you know that mommy once had her picture taken with Scooby Doo in person? Yep!

Scooby Doo and those meddling kids seem to get around and are always finding a mystery to solve.  By the end of the show, the scary monster/person is always unveiled to find a real person.  But hey, half of the fun is getting there and seeing Scooby and Shaggy shake out of control!  And who in the world can forget Fred’s plans and Velma losing her glasses or saying “Jinkies”.

The 30 minute shows were wonderful.  Mom says she remembers coming home, her mom popping popcorn for her as an afternoon snack and her watching the series before hitting the homework.  Life was grand, huh?  Then, the greatest thing happened – around 1976, they started The Scooby Doo/Dynomutt Hour.  An hour long time of fun, giggles and adventure.  Could it get any better?

Not really – snorts.  In 1979, the creators went down a slightly backward curve and introduced Scrappy Doo.  And then in 1980, The New Scooby Doo and Scrappy Doo.  Yawn fest.  These were good don’t get me wrong.  But, they just weren’t the same.

There was just something about that little whiney ‘let me at em’ pooch me and mom just don’t care for.  I can’t put my hoove on it but it was just wrong.  He was… annoying.  Yeah, that’s it.  Annoying.

Now, in 1988 they came out with A Pup Named Scooby Doo.  This was actually a fine show.  Scooby Doo as a puppy was great – he wasn’t anything like that little character called Scrappy.  Go figure.

In 1985, they came out with – The 13 Ghosts of Scooby Doo.  This movie even “Ghost Starred” Vincent Price – snorts.  Even though some of the kids weren’t in it (only Daphne, Shaggy, Scooby and Scrappy) it was still a great first show.  Of course, there were only 13 shows – you know until they caught everyone – snorts.

Vincent Price played Vincent Van Ghoul and traveled the world trying to capture thirteen of the most terrifying ghosts upon the face of the earth.  Shivers – for the day and time, it was scary to the bone for this little oinker!

After this, they actually turned out some intriguing movies –

Scooby Goes Hollywood; Scooby Doo Meets the Boo Brothers (one of my favorites); Scooby Doo and the Ghoul School; Scooby Doo and the Reluctant Werewolf; Scooby Doo in Arabian Nights and Night of the Living Doo.  These were the forerunners of something great to come.  Although they had some mystery and intrigue, the writers were getting better with the characters.

, the first film that wasn’t animation came out to spook us all.  At this time, we find that the gang have went their separate ways.  They are all approached to go to Spooky  Island – of course to solve a mystery.  And trust me, this island was spooky – and that Daemon Ritus – shivers.  By the end of the movie, Mystery Inc has been reunited and all is good in the world once again.

In 2004, Scooby Doo 2 Monsters Unleashed was released.  This movie is my all time favorite!  It highlights all of the past ‘monsters’ they have met throughout the years at the new opening of the Coolsonian Criminology Museum.  And, BONUS, the monsters seem to be coming back alive!  Shivers. 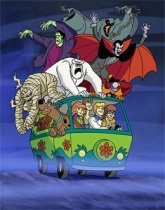 So yeah, either animated or film, those kids have some awesome adventures out and about.  Who you gonna call – I’m going to call Mystery Inc.  So the next time you are feeling a little down and need a pick me up, why don’t you pop in a Scooby Doo video.  It always makes us smile here at the Hotel Thompson.

Do you remember some of their monsters from the past?

AND, do you know the full names of all five characters?  Don’t look, answers are below my friends.  🙂