Shopping, Weekend, Pet Rocks and Such

Oh my sweet friends – I hope you had a wonderful LONG weekend – a happy one with lots of rest and relaxation.  I did – snorts – but I can’t say the same for my humans.  You see, my humans have been slackers lately.  There I said it and they know it’s true.  Mom has been playing catch up with so many things that she has been juggling in her life.  Finally, I had to sit her down this weekend and have a human to piggy talk with her.  She has to catch up… like NOW.  So Saturday, I made her finish doing some shopping for me.  I have so many things to get sent out… you know a piggy has to put his hoof down, righ

But first up – I think I have forgotten something to post about Bashful.  I’m sure some of you saw where when he came back from Australia this past time he had a son named Chip.   Who can deny that parentage with the matching grin, huh?  You can check the post out here of when Bashful came home. He had a ball in Australia visiting Fozzie while they went on vacation to the Great Barrier Reef.  But they also found out about Bimby having his baby out of wedlock when they did the movie “Rockadile Dundee”.  Long story short, Bimby went into rehab (bless her heart) and Bashful signed paperwork taking custody of his son Chip.  Chip was just a mere baby when he came home here to the Hotel Thompson so we’ve had to get him through the diaper stage – unbelievable how much water a little rock

And of course when Bashful came home, not only did he have his son Chip but he also came home with Hudson.  See, I don’t believe I posted about this.  It’s been so crazy here at the Hotel Thompson over the past several months!  Hudson is adorable, isn’t he?  All the way from Australia and what a cute little accent.  He has been hanging out here with the other pet rocks and has a cute little chemistry with Rockelle who is also from Australia – who would have guess huh?. 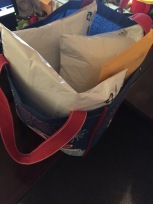 You see I’m telling you all of this because I *finally* got mom to get all of my shopping done so that we could send out not only Bashful but his son Chip to the next person on the list.  So you see this bag to the right?  There are four envelopes in that bag that got mailed out this morning from the good ole United States Postal Service.  One of them contain Bashful and Chip.

Three other envelopes are gifts for different friends in blogville.  Just who will receive them?  What do they contain?  Aren’t you excited to see what goes where and who gets what?  I know!  The anticipation is killing this little oinker.  I just hope mom remembered to pack everything I told her and to sign the cards – snorts.  Wouldn’t that be hilarious?  Maybe not… maybe I need to go ask her to double check.

And of course after mommy finished going to the post office, filling out Customs declarations and spending money, she just had to come back to a nice gooey ooey Salted Pecan cupcake.  She said that was her payment for standing in line and filling our forms for me.  Sure mom – that’s fine.  As long as you got my packages out – knock yourself out.

Snorts and oinks my friends.  I’ll definitely keep you posted on the travels of my packages 🙂