Bashful Made it Home! 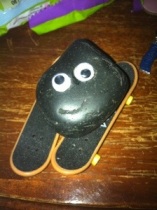 Bashful sweet Bashful finally made in home to the Hotel Thompson this weekend.  He came riding in on his skateboard that he got for Christmas at Misaki’s.  He was tired, had jetlag  and had a LOT of explaining to do on his travels back home.  I let him get some sleep but told him we needed answers.

Over breakfast this morning, he told us that he had an awesome time with Misaki and family.  He spoke of fun playing cards, riding his skateboard down some ramps, getting some beer and seeing some sights.  He also said it rained a lot more there than here in south Georgia – snorts.  He has memories that he will never forget and so much fun! 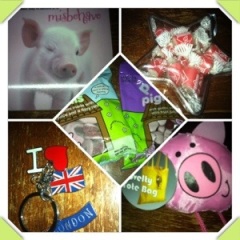 And he brought home some gifts.

A piggy coaster that reads, “The best way to behave is to misbehave”; some seaside rock candy in the star (really delicious!); some Percy Pig candies (I can’t get enough of these!); a wonderful keychain to remind me of my travels and a pink piggy tote bag.

Thank you Misaki so very much for the treats, the kindness of hosting my Bashful  and showing him a great time.  I think he even came home with the cutest little accent!  I am so jealous of it. He has definitely gotten the rock girls heads turning here at the Hotel Thompson with that accent – snorts.

AND, Bashful came home with a friend.  Misaki said he was “sweet but slightly dim”.  I think they got into great trouble traveling together on the way home.  It could account for his interview with Rolling Stone magazine – snorts.

May I present to you the  newest member of our rock clan – Benedict Cumberock.