Dear Bacon – I’m a firm believer that you shouldn’t judge a book by its cover.  My mom/dad always said to make sure you can have fun but yet bring home the kibbles if you know what I mean.  So by day, I help my adopted father in his accounting firm.  Don’t let it fool you.  I have the brain of Einstein and can figure numbers in the blink of an eye and the wag of a tail.  Then at night, I trade my suit for a board and hit the streets of my hood.  See, I can do both and I think I have some great qualities for a woman in my life.  What do you think?  Signed Two For One

Dear Two For One – BONUS!  There you go my friend.  I think that is awesome that you make a living, can bring home the kibble and still know how to have a great time.  I think any woman would be honored to have you in their life for sure!

Dear Bacon – Shaking my head.  I don’t get it.  People point and laugh at me.  Some even call me a rolling ball with fur.  How rude.  I’m just a little squirrel trying to get along in a big world.  Should my feelings be hurt?  Signed Pudge

Dear Pudge – First off – YES.  This kind of behavior happens in the real world of adults as well my little friend.  Some peeps just don’t have the knack of keeping their mouths shut if they don’t have something nice to say.  You so don’t need to put up with this behavior.  There is  no room for bullying in this world!  You are welcomed to move into the woods of the Hotel Thompson any time.  We like to treat everyone the same here. 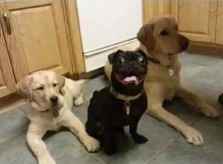 Dear Bacon – There is *always* that one sibling in the family that is just stupid – there’s no other way of putting it.  We were sitting in the kitchen, acting like we had no worries in the world, not begging but yet letting the staff know we were there and waiting patiently for a snack of some type.  That’s when brother has to sit up and look stupid.  Okay, he doesn’t have to look stupid cause he is stupid.  But really.  He has to stick his tongue out and act all, “Give me…give me…give me”.  Really, rolls doggy eyes, his class is so out the window.  Do you have a wierdo in your family?  Signed Lewis, Brutus and Stupid

Dear Lewis, Brutus and Stupid – Oh do I!  OMP – I like to call him Hemi.  He’s the cat from you know where here at the Hotel Thompson.  He’s daddy’s little baby and does no wrong.  Yeah right.  He does no wrong because daddy never sees him doing anything bad.  I know exactly the feeling.  I say keep your hide high and use the mute button as much as you can with your brother to block him out.  That’s what I do here – I act like Hemi doesn’t exist… yet he still finds time to remind me by slapping my butt.

Dear Bacon – Sometimes one has to take steps into their own paws.  My human just couldn’t find the time to make me some biscuits.  But that’s okay.  I find the recipe and took matters into my own paws.  I think they turned out pretty well myself.  If you want, I’ll send you the recipe.  I’m sure they are piggy friendly as well.  Smooches – Mrs. Polly

Dear Mrs Polly – I think that is brilliant.  Why wait for the humans when we don’t have too.  I think that would be great to do.  But hey, why don’t you just come over and use my kitchen to show me how to make them.  The humans are gone in the afternoons – hogs and snout kisses.

Dear Bacon – During a tough week, when Friday night gets here you just want to crash and burn.  It was one of those tough weeks for me.  Too many brushes with the mailman, the UPS driver that got away and too many days of chasing that cute little cat next door.  Friday night, I crashed.  Of course, that was after my bender of my go to food selection to make me feel better.  Coke and a Big Mac.  Can you say yum-yum?  So my friend, do you ever crash and burn?  Signed The Pupster

Dear The Pupster – YES!  I have crashed and burned many times.  In fact, once my week was so bad that I brought the entire bucket of animal crackers in my bedroom and munched into oblivion.  The tummy ache later that night was so worth it.  I do feel you my friend.  Hope your day is better.

❤ Remember friends – Dear Bacon can’t happen without YOU.  Please continue to email me your pictures and letters.  ❤