Thank You My Friends

My friends – everyone here at the Hotel Thompson wants to take the time today to say thank you.  Anytime you lose a member of your household, you feel lost and out of sorts.  YOU my friends have helped us with this grieving period through your sweet comments, cards, emails and phone calls.  There are times that we still get ready for bed at night and we call for Mouse Girl without thinking… we give our treats and get enough for her without thinking… there are so many things that we have done for over the years that included Mouse Girl that it’s hard to let it go overnight.  Today, we wanted to share a few things about our Girl in hopes that everyone sees what a special gal she was and still is watching over us.

8, Hemi’s brother Tybee passed away.  We had gotten Hemi and Tybee from a shelter when they were only 3 weeks old.  We brought them to the doctor, had them tested and bottle fed them until six weeks.  Fast forward three years and Tybee got sick.  We found out that Tybee had feline leukemia and all the testing we originally done was too early for that disease to show.   When he crossed the Rainbow Bridge, not only were we devastated but so was Hemi.  He would through a mourning period as well and wouldn’t eat, at times he wouldn’t sleep and he meowed for his brother.  In speaking with the vet, they suggested we get Hemi another friend since at that time we didn’t have any other anipals in the house.

I called a local animal shelter and made arrangements to meet a Maine Coon named Belinda.  We me and Jim got the shelter, Belinda wanted absolutely.nothing.to.do.with.me.  Can you believe that?  There was just no ‘click’.  However where Jim was standing, there was another Maine Coon that was determined to get Jim’s attention.  She was meowing to him and grabbing at his arm/shoulder through the crate she was housed.

Every time Jim would walk away, she would cry louder for him to return.  I walked over to her crate and she was trying to reach out for me.  We then got to hold her.  It was like coming home – she felt like she had always been in our arms.  She purred and jumped from me to Jim.  It’s true what they say – cats pick their own staff.

But there were other signs that this particular cat was ‘the one’ to adopt.  When I went to complete the paperwork, I found out this princess’s name was Mouse Girl and that she was born the same that my dad had passed away.

Of course, we considered

these all “signs” that we were doing the right thing.  And upon getting Mouse Girl home, it was like she had been there for years.  She knew exactly where the litter boxes were, where the food/water was and where we slept.  It was quite strange.

And Hemi went right up to her, purred and started bathing her.  Two cats that had never met but seemed like they had known each other for years.  What are the odds of that?

They quickly became close buds and even drank from the fountain together – because you know a ‘bowl’ of water is just too common for them – LOL.

And although she was very loving to the other anipals, it took her time to adjust to me and Jim.  Not knowing her past history of when and how she came to the shelter, we picked up real quick that she didn’t trust very easily.  But me and Jim stood fast, gave her love and let her adjust according to her schedule.

It took her almost a solid year but she finally started coming to bed with us at night and sleeping at my feet.  And then she would come up to you and touch you with her hand as if to say, “Pet me.”

She was a big girl too which Maine Coons often are.  At her prime, she was well over 20 pounds; however, she never pushed her weight around.  If Hemi, Bacon or Houdini came up to her to play, she played.  And although there were times the boys got on her nerves and she had to do was sit on them, she didn’t.  They would squabble on one paw and then all of them would cuddle up together and sleep.

So to our beautiful OMG.  We ❤ you with all of our hearts and we thank YOU for picking us as your staff.  You will never be forgotten.

Hello my sweet friends – BARKS!  I do hope your week is going well – thank goodness for the weekend.  I can’t wait to get in some lap time with mom.  I wanted to show you a picture that Bacon took this week here at the Hotel Thompson.  It’s of me (of course!) and my girl Mouse Girl… or as we lovingly call her here OMG (oh Mouse Girl).  See we love each other and get along just fine.  It’s just that Hemi boy that doesn’t play well with others – barks with puppy laughter.

I hope that everyone has a fantastic weekend with lots of rest and snacks – I’m sure going to look for my share.  And I leave you today with another Jokes from Daddy.  He is having such a great time with these.  i do hope that you are enjoying them as well ❤

Posted by Piglove on 04/15/2016 in Hemi and Mouse Girl, Houdini, Jokes with Daddy, Paw Time with Houdini

Hemi here peeps in blogville from the Hotel Thompson. Just wanted to chat with everyone for a minute.  There’s lots of stuff going on here at the Hotel – I mean LOTS.  And let me add that I know this is Bacon’s blog.  But Houdini gets his shots on Fridays and I heard that Oh Mouse Girl even got to post something last week.  Well, you know what they say about saving the best for last – meow!  So here I am.

First off.  Don’t believe everything the pig says about me.  Look at my picture.  Do I really look like the purr thing that would start something, finish it and leave a print on his butt?  Poo – of course I wouldn’t.  I’m as gentle as… well a pussy cat.  I wouldn’t hurt a fly… maybe take his wings off and play with him a bit.  That’s all.  Nothing major.

Second off.  I wouldn’t believe everything you read from Oh Mouse Girl about her relationship with the little guy Houdini. The that protests too much is usually guilty.  I’m just saying.  You haven’t seen some of the things that she does with the excuse of, “Something was in my eye.”  That excuse only goes so far in certain situations.  Really it does.

Third off.  Houdini.  Shakes head.  That tyke has more energy than the Duracell bunny at times.  He is non-stop go-go-go.  He is like a roller coaster that continually rides all day long.  He keeps us all young here with his antics.  And what you might have read about me taunting him – of course not.  Would I do that?  Nah!

And for those that have asked, does this look like the ginormous paw you have read about from everyone.  It’s not that huge at all.  No way!  I’ve seen bigger.  Does it look like the paw that would slap the pig’s butt?  Push Oh Mouse Girl around the Hotel Thompson?  Hold Houdini’s head so he can’t get me.  Of course not.

It’s a paw of love.  A mitten if you will of loyalty.  A gentle shake or touch of the face.  Nothing more.  It could never be used in combat.

So there you go peeps.  A little word for Master Hemi here at the Hotel Thompson.  I hope I’ve been able to set some things straight about what you have heard.

I Kissed A Girl and I Liked It!  Come on my friends – you know the words to Katy Perry’s song.

Barks!  Mouse Girl can protest all she wants.  I know there is something there.  She is my little cougar.  My little purr thing.  My fuzzy wuzzy.  See, pet names.  That means business.  She has them for me too.  She calls me her mutt.  Her dumb dog.  The bother.  aaww – see I told you she love

It all started out innocent.  She was asleep dreaming… of course of me.  I walked over to her and she woke up kissing me!  Proof is in the picture my friends – she has the HOTS for me.

Fortunately Bacon was with mom on the other couch and he caught the picture in mid-stream like the paparazzi.  Way to go bro! 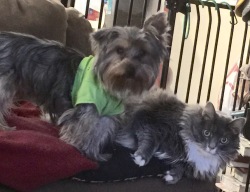 Then we heard the clicks and saw the flash of the camera.  It took us both by surprise. You know what happens when you are taken by surprise and you get ‘caught’ doing something forbidden, we both jumped back a little.  You can tell that from the picture that was taken right after our kiss.

And don’t get me wrong.  I’m not trying to kiss and tell.  I’m trying to let the world know – I’m in ❤ with Mouse Girl.  And she loves me too.  She’s just not ready to admit it yet.  But you can tell too, right my friends?  And if these two pictures don’t prove it, Look at this one:

See that’s both of us together sleeping with our arms and heads entwined.  There you go.  Now you see?  That’s my belly up front, Mouse Girl is behind me.  And mom/dad are right in calling her OMG — case I think I’ve called her that several times, “Oh Mouse Girl!”

This is a run by posting – snorts.  I’ve got so much to get done before my big date this weekend with my love Nylablue.  You know – mani/pedicure, shampoo, bath, must find Jovan musk cologne, reservations – sigh – the list is long.

Happy weekend my friends!  I hope you learned something new about me.