It has been so totally busy here lately at the Hotel Thompson.  We had the demolition and renovation.  We had the cleaning and cleaning and more cleaning from all of that.  We had new furniture and everything has been out of place – and we are *still* putting things back together.  Mommy really pushed herself too much during all of this time.  And THEN Bashful came home from his visit with Fozzie in Australia.  That’s when all hell broke loose.  Yep I said hell.  HELL broke loose here at the Hotel Thompson.  You don’t believe me do you?  Okay I’ll tell you.

Do you remember the first time Bashful went to Australia to spend some time with Fozzie and her anipals way back in December 2013?  You can read about some of that trip here.  I’m talking specifically about that trip when he made a movie called Rockodile Dundee co-starring Bimby.  Let’s just say that we thought some things got out of control with that – I mean co-star Bimby.

Well upon Bashful’s return trip to Australia in December 2014, he had some problems to take care of in the deepest forms.  You see, Bimby was pregnant after the making of the Rockodile Dundee movie.  Shocker huh?  Well she carried the baby for nine months and when Bashful returned to Australia, she said he was the rock daddy.  Now you can imagine Bashful’s shock from that. BUT, can you imagine the shock of Fozzie calling me (Bashful’s daddy) and explaining (A) Bashful was now a father and (B) I was now a grandfather?!  Oh dear piggy heavens – I can tell you that was one interesting phone call to say the least.

Not only was Bashful a father but Bimby was in trouble.  Bimby had started hitting the bottle – hard.  And she was letting herself go not taking care of the baby.  So what to do huh?  First things first.

Bimby went into rehab.  There was long conversations about what to do and the biggest thing was to put the baby first.  Of course a rock DNA was conducted just to make sure that Bashful was the father.  The results came back and they verified 99.9% that Bashful was the father.  Then Bashful and Bimby had a long talk about the welfare of the baby.  The baby was 3 months old and Bimby decided that she didn’t want to be a mother – she was to young to settle down.  And putting the best interest of the baby first, paperwork was drawn up by the attorney’s and Bashful now has custody of his son.

So everyone here at the Hotel Thompson had to get everything ready for a new baby that would be soon arriving.  The nursery had to be set up, a pediarocktrician had to be lined up and of course everyone here had to be told what happened.  All of the rock clan were excited to have a new baby.  And I admit it.  I was rather excited to be a grandfather and to see my grandchild.  What would he look like?  What was his name?  Would he resemble us?  A lot of things were going through our minds.

Then the little tyke arrived here at the Hotel Thompson.  Oh my piggy heavens!  It was love at first sight with all of us.  The ooh’s and aaawws.  WOW!  So without further ado, let me introduce you to Chip.  Look at him!  How could we ever doubt his DNA?   He is quite the chip off the old block – you think?

Confessions of a Spoiled Pampered Pig

Okay.  They say that admission is the first step.  So, breathe in.  I’m going to admit it.  Are you ready for this?  Are you sitting down?  Here it goes –

There, it’s out.  I feel so much better now.  It was hard to say that out loud and I know that you are shocked about that statement.  I’ve adjusted myself to my living quarters and my way of life at Hotel Thompson.  I’ve learned though from watching television and from the different emails that I receive (BaconThompson@gmail.com) that I’m pampered more than most animals… heck some more than regular people.  It’s a hard way of living and I do consider myself really lucky to have been adopted by mom and dad.

There are a couple of things that have been brought up lately at the house and in emails.  We’ve had some people ask why I don’t go outside.  Please don’t think that mom hasn’t tried.  She has several times.  I’ve never been.  I was a runt and was inside being taken care of by a surrogate.  Then mom adopted me and brought me home to my nursery.  I have a potty patch in my room and I’m trained to use it.  In fact, I have my own room.  I have my own bed.  I have my own television.  Mom has tried her best in tempting me into the back yard.  But you know, nature is out there.  I would get my hooves dirty.  I know – I know.  I might like it.  But what if I like it too much and never want to come back in again?  There’s so many questions to ask myself.  I’m not saying that I’ll never go outside.  I’m just saying for now, I’m happy and content.  Mom says that when I’m ready, I’ll venture out and explore.  Maybe this spring I’ll try it again.  We have a nice big backyard, fenced in and there’s lot of grass out there.  I’ve even watched the bunnies play out there.  So stay

tuned come Spring – I’ll think about it over my hibernation in the winter months.

The other thing that people have been shocked and amazed about is that I sit on the sofa.  Why not?  Do your purr things or barky things sit on the sofa?  Then why can’t a oinker?  🙂  I used to jump on the sofa and I still do at times.  But, I’ve learned lately that if I put my front hooves on the couch, mom will pick up my hams and help me on the couch.  Isn’t she great?!  I then stretch out beside her, she wraps me up in our cuddly blankie and we snuggle.  She warms my body up with her body heat and we watch television.  Okay – I usually drift off to sleep sometimes and snore but we’re still snuggly.  I love sitting with mom.  I call it our quality time together.

I’ve surfed the night lately and I have found that I’m not the only piglet that sits on the sofa.  Shocker isn’t it?  Some even have friends that sit with them.  Take a look and let me know what you think – 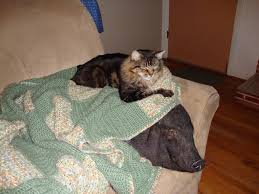