Hallelujah! Can you believe they make a holiday for this little oinker we have here at the Hotel Thompson called Bacon? It’s not enough that he’s a spoiled little tyke, now he has holidays. It’s certainly a great reason to celebrate with Bacon – we’ll take that anyday.

Yellow Pig Day is today, July 17th. This is not to be confused with National Pig Day celebrated on March 1st every year. Are you wondering what the difference is between the two pig day holidays? Let me explain it to you 🙂

National Pig Day on March 1st, recognizes and appreciates domesticated pigs, like Bacon. Pot-bellied pigs are often found in petting zoos and sometimes they can be found in regular every day homes like at the Hotel Thompson as members of the family. (I would say as pets but we all know that Bacon has gone beyond that category and is now a ‘member’ of the family. Some would say a child.) I’m sure you already know due to Bacon’s blog here that pigs are highly clever and intelligent animals. They will focus in on one thing until they accomplish whatever they are trying to do. Pigs like Bacon can learn how to open doors, gates, fetch like dogs, roll over and other amazing tricks. Ellen Stanley, an art teacher in Texas, created National Pig Day in 1972. Her intent was to to recognize and be thankful for pigs as intelligent domestic animals. And I have to admit, this holiday is HUGE at the Hotel Thompson.

Yellow Pig Day on July 17th is a mathematician’s holiday celebrating yellow pigs and the number 17. Have you ever seen a yellow pig in real life? Probably not, but wouldn’t it be fun to have them yellow? Why not celebrate yellow pigs anyway! This holiday has been celebrated yearly since the early 1960’s, primarily by mathematicians on college campuses but hey it’s a holiday – let’s celebrate! I wonder if Bacon’s Aunt Tina knows about this date? Did you know that she is in fact a mathematician and a college professor? See smartness runs in the Thompson family 🙂

The Yellow Pig was created by mathematicians Michael Spivak and David C. Kelly in the early 1960’s. Spivak and Kelly were students at Princeton University, studying of course mathematics. History was made as they were listing interesting properties of the number 17. During this thought wave, the yellow pig was born. The yellow pig and the number 17 have been linked ever since.

So, spend some time today thinking and working in multiples of 17 and thinking about little yellow pigs. 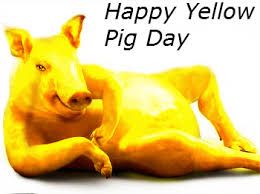 I bet you didn’t know that I have an entire holiday to myself? Well – I do!! Today is National Pig Day. I wait all year for my holiday. This is my second one and the party is on!

But you’re probably asking yourself what is national pig day?

National Pig Day is an event held annually on March 1 in the United States to celebrate the pig. The holiday celebration was started in 1972 by sisters Ellen Stanley, a teacher in Lubbock, Texas, and Mary Lynne Rave of Beaufort, North Carolina.

According to Rave, the purpose of National Pig Day is “to accord the pig its rightful, though generally unrecognized, place as one of man’s most intellectual and domesticated animals.”

Since today is my day, I get to do what I want… within limitations. I get my favorite foods. I get the extra loving and snuggles. I get a piggy massage. I get my hooves done. Whatever I want – it’s all about pleasing this piggy. To all my fellow pig friends – cash in on this our holiday – enjoy it to the fullest!!