Dear Bacon – They know me in the wild as the guy to go to for back adjustments.  We all have problems with our backs from time to time.  You know with all of the jumping, running and playing with our buddies.  So I’m here to offer you my services dude.  When your giddy up has gone and went, give me a call for an adjustment.  Signed Crack Doctor

Dear Crack Doctor –  WOW.  I’m at a lost for words.  Really.  By the looks of that purr thing that you are “adjusting”, I would take a gander and say they are as well.  Back adjustments… hhhhmmm… I think I’ll pass.  You know the little tyke here Houdini has great paws for massages.  I think I’ll call him for a massage.  But hey, I appreciate the offer.  You carry on and flourish with your business my friend.

Dear Bacon – Let’s understand each other okay.  You show respect to us purr things and I won’t have to call that elf of yours Don Juan.  Capice?  We have ways of making our communication brutal.  Just one phone call from Hemi or Mouse Girl and I will drop a line to elfy.  We wouldn’t want that now would we?  Signed Enforcer

Dear Enforcer – gulps.  Understand my friend.  I understand completely.  No reason to call Don Juan.  We are all family here.  Love your coloring and by the way have I told you that purr things rock?  They really do – honestly.  Creeps out of this letter….slowly and silently.

Dear Bacon – Sometimes the best things in life is just sitting back to watch the animals and humans.  You can see some amazing things in the household when you do this.  Just be quiet and observe.  Have you ever done this?  Signed Voyeur

Dear Voyeur – YES I agree 100% my friend.  One time, I watched daddy come out of the shower.  My eyes!  What has been seen can not be unseen.  And hey, he jumped pretty high when I snorted – rolls with laughter.  Carry on watching and let me know what you see next. 🙂

Dear Bacon – I *almost* got caught in this picture.  I mean dude it was a close call for sure!  The barky thing is so loud and loves to pick on us purr things when the humans aren’t lucky.  I had it with that mutt up to my forehead.  So, he came by and I was just about to flick my nails out when I saw the humans out of the corner of my eye.  Thank goodness I saw them looking so I did what all cats do best – I looked disinterested and innocent.  You know the look I’m sure.  But it definitely was a close one.  Have you ever been almost caught in action?  Signed Wolverine

Dear Wolverine – Squeals!  That was a close call my friend.  Thank goodness your spidey senses were working and you noticed the humans.  I hope that you did get even with the barky thing when it was more convenient – snorts.  I’m sure he had it coming his way.  Snorts – have a great one! 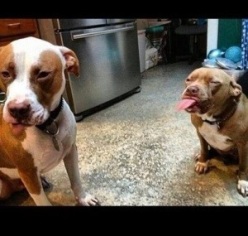 Dear Bacon – Really?  This is the juvenile behavior I have to put up with at my own castle.  My little brother doesn’t get his way so he acts like a small person wearing diapers and sticks his tongue out at me.  Really?  What is he two?!  What am I to do?  Shakes head.  Signed – Beyond Irritated

Dear Beyond Irritated – Just walk away.  My best advice my friend.  Unless you want to contact the Enforcer up above or Wolverine from up above.  I’m sure they can tell you a few pointers.  I certainly couldn’t.  Cause you know I’m just so cute and would never do anything to anyone. 🙂  Right Enforcer?  Snorts.

Remember friends – keep your pictures and questions coming.  Send them to my email address.  Have a great day!

Information has been received over the wire reports this morning that the juvenile rolling stone has been caught in another act of random mischief. This time, the act took place in a local Target department store in Morrow. The juvenile rolling stone was caught on store security riding a tan in color skateboard down the sporting goods aisle. In one part of the video, you can actually see where the skateboard goes around a human wearing orange clogs and then runs into a display shaking his little pebble head from the impact.

This goes to show that the juvenile rolling stone is becoming more mischievous.

Last month, authorities reported that the juvenile rolling stone created havoc by riding a blue skateboard carelessly throughout the Walmart department store. He was observed skateboarding down aisles of the store in the toy department in between humans feet. He was even overheard shouting at the Walmart workers, “Whee, whee, whee!” and “Catch me if you can”. 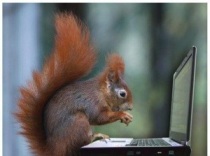 keeping his paws on the nuts of the world