Back for the reveal of the true answer in FIVE STATEMENTS.  Which one did you think was the truth?  Let’s recap the statements below.

Statement 2 – Mommy used to be a ballerina.

Statement 3 – I love the feel of newly mowed grass on these hooves and run on it all of the time.

Statement 5 – I always mind my matters and do what mom/dad say.

Let’s break it down my friends.  Daddy did use to play football, not professionally but in high school and college.  And mom, well she couldn’t stand on one leg for any length of time let alone her toes.  Grass on my hooves – shivers – surely you jest.  I’m not *that* kind of piggy – snorts.  But me not minding my matters or minding mom/dad?  Well, I have been known to be sent to my room and trust me.. I slam the door once I’m in there – snorts.  So, that leaves us to the correct answer.

Check it out here to find out more information 🙂

Who Did Mom/Dad See at the Beach?

Mom and dad had no clue whatsoever that they were filming another movie at Tybee Island last week.  When they arrived and checked into the hotel, they saw a lot of tractor and trailers parked with the sign to the left on them.  They’ve made several movies here so mom and dad got excited.  They asked around and were told what was being filmed.  How awesome.  How exciting.

Then they did some walking around themselves and saw this trolley to the right that mom immediately took a picture of… can you guess what the movie is?  Can you?  Would you be surprised to learn that they are filming the next Sponge Bob Squarepants 2 movie in the Savannah and Tybee Island area?  For real!

How could mom and dad miss this in their trip planning?  And they found out that the week before they arrived, Antonio Banderas was doing his shots as a pirate.  What?!  How could they miss out on all of the wonderful fun.  Right?

So the movie comes out in 3D in 2014.  Mom/dad knew they missed it by arriving late for the game.  But they were going to enjoy the beach nonetheless.

So Monday, mom/dad decide to walk around the beach, enjoying the sun and surf.  They walked down to the Tybee pier and skipped the steps going for the direct walk up.  There wasn’t any people around so mom does like I do – puts her head down and charges on – snorts.

They passed someone that looked faintly familiar.  There was someone in front of this person and another behind the person.  Mom continues on dragging daddy behind her.  She says, “Hey” to the people.  They reply hey back.  I mean heck she is from the south – you gotta be friendly, right?  Then the person in the middle is in a blacked out van and whisked away.

Mom looked at daddy and said, “Who was that?”  Dad says describ him (because you know he can’t see very well).  Mom describes him – all in black, black top hat, black, long curly hair, black glasses – dad stops her immediately.  What?  Say that again to which she did.  About the same time, one of the people that had walked him down from the pier said in their walkie-talkie, “Slash to base camp.”

Holy batman – it was Slash, the rock guitarist from Guns N’ Roses.  Don’t feel bad if you didn’t know who he was either.  Mom didn’t – snorts.  I had to see a picture to remind myself of who he was.  I’m adding this one so you know too.  He did a cameo in the new movie.  And mom saw him.  In fact, she could have flicked him on the ear as daddy said.  It was that quick. And you know how daddy can be funny. It was a quick meet but if given the chance daddy was going ask Slash to take a picture with Bashful because you know it would make him famous – snorts. 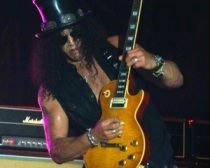