My silly mommy – snorts.  She got a package in the mail yesterday.  It was one of the things she ordered off of her Amazon account. She ripped the package open – and I helped in anticipation 🙂

That’s when I saw it.  Another pink imposter of a pig.  I say imposter because I’m the only *real* pig around the Hotel Thompson.  This thingy mom said she needed for work.  Yeah, shakes my head to the left and right.  Whatever gets you through the day mommy dearest.

Personally, I think you bought it just so it will remind you that you have me at home… waiting for you at the end of the day.  Yeah, that’s it.  A reminder of me… minus *my* long furry tail… minus the luxury black velvet color of *my* fur… minus my cute little marking on *my* snout… minus my little white skunk patch on *my* forehead.  Sure.  I can see how this imposter reminds you of ME.

Snorts, sticks his tongue out and goes to *my* room to pout.  Perhaps daddy should tuck me into bed tonight and read me a bedtime story.  You might be too busy playing with your imposter friend.

Just when you’ve thought you’ve heard everything, snow conspiracy?  Yep I said snow conspiracy.  Shakes piggy head.  I was watching a local television news show here in Atlanta on WSB TV this weekend.  They were reporting that this nighmare of a snow ‘storm’ we had last week was a hoax.  Do you hear me?  A hoax.

Let me present exhibit A to the right here.  This is a picture of part of my magical backyard.  Notice the “conspiracy” snow in the picture?  Looked real to me.  Heck, it felt real to my hooves when I was outside running around in it.  Of course, I don’t have anything to compare it to because it was my first snow but it felt and looked real to me.  And OMP (oh my pig) – I tasted this conspiracy snow.  What will happen to me?  Who do I need to call?  Am I going to blow up or become a mutant?  What will this piggy do?!

So are you wondering what this conspiracy theory is about?  WSB TV reported the following:

“The conspiracy reasoning goes like this: the snow is unusual in Georgia and other southeast areas and doesn’t melt when burned. Therefore, it must be fake snow.”

WOW.  Considering that reasoning, even this oinker has to scream conspiracy – rolls piggy eyes.  Yes it’s true.  Atlanta got what 2.5 inches of snow and literally shut down with the highways being parking lots.  There’s reasoning behind that – really there is.  I’ve thought long and hard about the situation.  I mean heck I had a lot of time on my hooves with being snowed in this past week – snorts.  Let’s discuss.

1 – Atlanta is in the south.  We just *don’t* get snow that often.  I think the last time mom and dad remembers snow it was in 2008.  That’s a long time ago considering how often other places get snow.

2 – Most places have more than one snow truck.  Our snow truck works.  I’m sure it’s a great snow truck.  But you see Bubba only drives it what every 5-6 years and this year he lost the keys.  By the time he found them, highways were now parking lots.

3 – That 2.5 inches that fell here was a LOT to us.  Consider what my friend Nylablue in Canada who has had 8 FEET recently.  Our 2.5 inches is like having 8 FEET.  We just don’t deal with it very well in any way.  Heck in reality, seeing one itty bitty snowflake here shuts us down completely.  And I do mean completely.  You even mention snowflake on the local news and it’s a mad house.  The grocery stores are bombarded like someone saying free doughnuts at Krispy Kreme.  Shivers – that should be a conspiracy theory.

4 – Did anyone think that perhaps it wasn’t a conspiracy theory by the government?  Maybe it was an alien takeover?  Perhaps Bigfoot sneezed?  Maybe the clouds cried?  And here’s a big could have been.  Perhaps all of the people that use dandruff shampoo washed all of their dandruff down the drain and the drain finally exploded?  Yeah, that could happen. 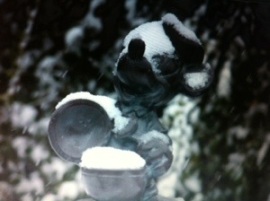 As you can tell, I’ve had a lot of time to think this over.  And let me finally present to you exhibit B to the left.  You knew there was going to be something Mickey Mouse in this post – snorts.  This is one of mom’s statues on the back deck of my magical backyard.

Perhaps the conspiracy snow was well snow… real snow fallen from the sky in a place in the south that just doesn’t get much snow.

WOW – That almost makes so much sense that it doesn’t sound real.  hhhmm – conspiracy snow anyone? 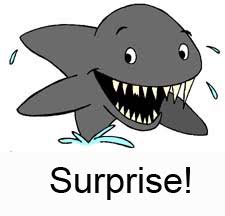