So friends how did you do this week?  Did you have a good week?  I was down 2 pounds – I’ll take that any week.  Little pounds add up to big pounds and slow wins the race here.  I type this watching the Super Bowl and I can tell you a couple of things.  First – Way to go BRONCOS!  I’m so excited that they won – it was a great game.  Half time wasn’t that bad – I was okay with that.  I’ve seen better and I’ve seen worse.  The commercials – my favorite was the singing goats.  Hilarious.  And what better way to end the weekend – I’m sick.  The hub unit came down with something on Friday night and I think he shared – bad husband.  Chills – cold then hot – sometimes both.  Sweats – runny nose – sneezy.  Yuck and muck.  So with 2 pounds being gone last week – 🙂 I’m happy

So how did YOU do my friends?

This is a run by posting – snorts.  I’ve got so much to get done before my big date this weekend with my love Nylablue.  You know – mani/pedicure, shampoo, bath, must find Jovan musk cologne, reservations – sigh – the list is long.

Happy weekend my friends!  I hope you learned something new about me.

They Call Me Tiny Swine Dancer

I think I can busta move like no one’s business.  They call me the party pig.  I’ve even been known to get mom up from the couch and shake her bon-bons with me.  You know you want to get up with me now and dance, don’t you?  Go ahead, no one’s looking.

I’ve seen some famous Russian ballet dancers like Anna Pavlova,  Mikhail Baryshnikov and Rudolf Nureyev perform.  They are totally awesome!  I can’t believe they dance and move so freely on their itty bitty toes.  I’m not a big fan of the tights because well we all know that my pot belly is not made for them.  It would show all of my fat rolls in a bad way.  Also, my hooves won’t allow me to dance like them but I found a sweetheart that looks great in a tutu.  If only I could meet her in real life – I think we could dance the night away.  Hubba Hubba my sweets

This type of dance is done all over the world!  Hey, when they play the upbeat music the announcer tells you what to do.  As long as you know the moves, your’re good to go.  And if you don’t know the moves, it’s easy to pick up and flow.  I think it’s fun when they say things like:  swing your partner; bow to your partner and bow to your corner; do sa do; promenade and partner trade.  So much fun!

This I *can* do.  In fact, my floor in my bedroom is like a tile that echoes nicely when I attempt to tap dance.  I’m not calling myself a Sammy Davis Jr or  a Gregroy Hines but I think I can keep up with them.  Every since I watched Mumble in Happy Feet, I absolutely knew that this dance was made for me – for sure!

Of course I can’t hold up to the greats like Fred Astaire, Ginger Rogers, Ann-Margret or Patrick Swayze for that matter.  I’m not what do they say – light on my hooves.  Although I do love to watch them on television.  They don’t just dance – they float!  It’s remarkable to watch them.  They make it look so easy.  Very talented people – very talented!

Snort – that’s right I said it.  I like to *watch* belly dancing.  Did you really expect me, a male pig, to say I like to belly dance – snort.  Nope, not me.  Although, like I said – I do like to watch it when mom attempts to do it.  Again, I said attempt.  I like it when she wears that shiny noisy thing around her waist and makes it sing.  That really piques this pigs interest.

I have to bow out of this one though. My hooves really hold me back on this style.  And really, this little pig can not compare to some wonderful, talented people out there.  You know the ones like:  Michael Jackson, MC Hammer, Beyonce, and Janet Jackson just to name a few.  I love to watch them on MTV and I dream of one day performing like that, but that’s just it – a dream.

I hope you enjoyed my dance breakdown.  Which one do you prefer?

Super Bowl – Are You Ready?

Are you ready for some football? The Super Bowl is like the big game of the year. It’s the icing on the cake. It’s the whole enchilada. Its the cherry on top of the sundae. It’s the big game. Do you understand? It’s like me getting a bedtime treat of apples, bananas and strawberries all at the same time. Shivers…give me a moment.

Okay…I’m back. So the Super Bowl will be hosted in New Orleans, Louisiana. I have relatives in Louisiana. My Aunt Tina, Uncle Wayne and my cousins Savannah, Maverick and Sherlock Bones.
The big game will be between The Baltimore Ravens and the San Francisco 49ers.

The game should be exciting because of the football but there’s also a twist in the Super Bowl. Ravens coach John Harbaugh is the brother to the 49ers coach Jim Harbaugh. Neat huh? What are the chances that would happen? One way or the other, a Harbaugh is going to win and bring home the championship.

Halftime festivities will be performed by the glamorous Beyonce. I know there are some of us that watch the Super Bowl for the game. But, there are others that watch it for the halftime performance and the new awesome commercials. I like it all – especially the snack foods that come with the game. That’s probably my favorite – snort. 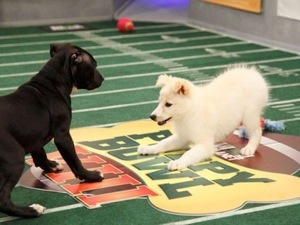 And let’s not forget the puppy bowl that will be on the Animal Planet. The puppy bowl is simple. Ten puppies at a time play on the field that is three yards wide by six yards long. When a pup drags one of the chew toys into either end zone, a score is recorded. And while they don’t get any breaks for sports drinks, they can re-hydrate with a water bowl on the 10-yard line. In the end, one dog is crowned MVP (Most Valuable Puppy), but really everyone wins. There will be a complimentary kitten half time show. I think next year we need to request pigs on this show… I can entertain.

There’s your Sunday highlights. What will you be watching? Hogs and kisses – Bacon