Welcome back my friends to the reveal of the five statements.  Which one did you guess was true?  Did you pick it right away or did it take some work in thinking about each one?  Just what kind of person is my mommy?  Let’s see if you got it right.

Statement #01 – Mom got a sport letter and award in Track when she was in high school.   Winner-Winner.  Mommy actually was the assistant to the track coach in high school for two years and kept the scores for all meets.  This is how she gained her letter and award.  Snorts – you thought she ran didn’t you?  If mom ran, she says she would have two black eyes and two broken knees.  Now that is hilarious!  AND who was the first person to guess it correctly – my brother Easy.  He knows my mommy!

Statement #03 – Mom graduated with a C average in high school.  C student – oh no.  Mommy was an honor graduate – straight A’s.  In fact, some would say she was a nerd!  The shock of that huh?

Statement #05 – Mom and dad met when mom was working her pole at her second job.  Now I had to throw this in there.  Of course it didn’t happen this way.  But once, mom/dad went to a book store when they were dating.  Mom wrote a check and the lady asked for her work number.  Daddy did tell the lady it was the Cheetah Club (which was a strip joint in Atlanta, Georgia).  The lady replied, “Yeah, right.  I don’t think anyone with Holly Hobby checks would be a stripper!”.  Now *that’s* funny.

Snorts!  With the uproar going on here at the Hotel Thompson, some of our schedules have been a little out of order.  Take for instance little Houdini.  Usually mom puts him to bed around 8:30-9:00PM.  The other night, her and dad were busy cleaning something out.  The little man went to his bedroom and proceeded to bring his bedroom bed – little lobster – to the front room. 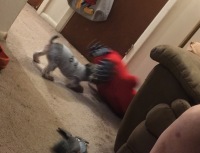 He pulled and pushed little lobster out of his room and down the hallway.  I was on the sofa and heard the little guy grunting and groaning.

I grabbed mom’s iPhone and started clicking pictures as soon as I saw him turn the corner.  Look at him go! 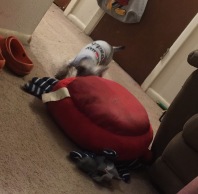 He was like “Don’t mind me – little doggy coming through here.” 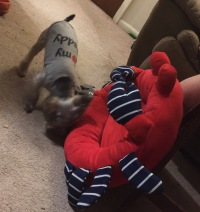 He went around all obstacles in his way including daddy’s tray and leg.  Nothing was slowing him down.  Yeah – I could have helped the pup out but I wanted to see how far he was going with little lobster in his travels.

He passed the table, grunted and groaned.  Looked around and did what I have to say is the cutest thing for a puppy.  He was like if mom/dad aren’t going to put me to bed and go to bed themselves guess what?  I’m going to do it myself and be in the middle of everything because you know something might happen that I need to know about. 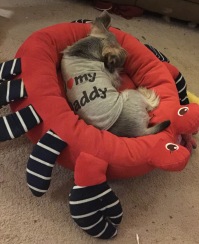 And there you go.  He curled up in little lobster, said his nightly prayers and passed out.  I have to admit that the little guy does sleep like an angel.  He didn’t even put on his pajamas.  What a trooper huh?

When mom came back in the room she was look WOW – he’s so smart.  He put his ownself to bed.  Then she shook her head and looked at his huge Kong bed that stays in the front room.  Asleep on the Kong bed was Mouse Girl.  The little guy didn’t want to wake up Mouse Girl so he got his own bed.

31 Days of Spook – Noise in the Night

What would *YOU* do my friends?  Would you hide?  Would you shake with fear?  Scream?  Pass Out? Run?

This is the question.  You’re home alone.  It’s the middle of the night.  You hear some strange noise coming from the basement.  You go check it out because it can’t possibly be anything bad.  You look down the stairs and you see this “beast”.  OMP!  What do you do?

Personally, up first I would pee on myself.  No questions asked – I would make it rain like it has *never* rained before.  Second, I would squeal to the high piggy heavens and thirdly – take off running!

Now, all of these things would happen really, really fast.  Wee, squeal and RUN!

What would you do?  Discuss.

Never Again Will I Enter the Unknown 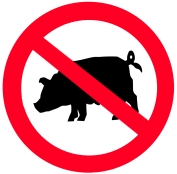 There’s one room in the entire house that is off limits to this spoiled little pig.  It’s mom and dads office/work out room.  They say there’s too many things in there that I can get into – I don’t know what they mean by that – looks around innocently.

This weekend, the door was slightly ajar.  I looked in the kitchen and there was no mommy.  I could hear dad in the shower singing.  I looked down the hall and the purr things were asleep in the bedroom.  I thought what the heck and pushed the door with my snout.  I didn’t go in at that time.  I just opened the door.  Nothing wrong with that, right.

There was a huge machine against one wall.  It had long arms on both sides, was black and looked like there some kind of walking rubber thing on the bottom.  Dad says during the week when he comes in this room he rides the beast.  He comes out all sweaty.  This has to be the machine that dad calls the beast.  It didn’t look too scary to me… just big.  I wasn’t interested in that… it involves sweat, huffing and puffing.  Not my kind of idea of a good time.  But still I didn’t go into the forbidden zone.

I looked to the right and got a little startled.  There was a giant Mickey Mouse standing there looking at me – I thought I had gotten caught until I realized that it was a big stuffed animal.  Nice though, I liked it’s big yellow shoes.  I could have fun playing with that.  It made like 4 times little ole me.  But still I didn’t go into the forbidden zone.

I saw a floor fan.  Seen those before.  Nothing interesting there.

I saw a bag full of books.  Seen those before.  Nothing interesting there unless deviled Bacon comes out in a destructive mood and wants to do a little confetti shredding.  Not interested in that today.

Then, I saw it.  OMP!  (Oh my pig!).  I whimpered, snorted, crackled like a rooster and told my little legs not to fail me now.  I ran as fast as I could to my bedroom and jumped in my little crate.  That’s where my mommy found me shaking when she came in from outside.

It was a scary thing I saw in that forbidden room.  I will *never* venture or peek in there again.  In fact, I think when I past that door, I may walk a little faster.  Shivers – the thoughts of what could happen.  Dad might get a wild hair up his bum and do that to me!  I better be extra good to him for a while.  Oh, you’re asking what do you see? 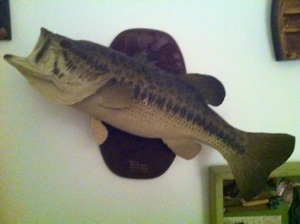 I guess that was the one fish that didn’t get away.

I guess dad was the Fish Whisperer that day.

I guess he didn’t exaggerate on the size of this one.

I guess this Fish Tail was true.

I guess this Fish trembled at the sound of dad’s name.

I guess he was right when he says good things come to those who bait.

I guess he can give up his books Hooked on Fishing and Fishing for Dummies.

I guess that solves the problem of To Fish or Not To Fish – that is the question.

Okay – snort – enough fish one liners – hope you enjoyed them 🙂