I Can’t Do That Again For A While 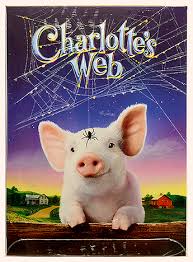 WOW – Big mistake.  I just can’t do this again for a while.  Yesterday while mom was off from the worky place, she let me pick the movie for movie night.  I know we’ve seen this I can’t tell you – a hundred times.  But, it *never* gets old… until yesterday.  You talk about crying.  Mommy started crying on the couch, I started whimpering and dad just had no clue.  This movie really movies us.

Charlotte’s Web was written by E.B. White and published in 1952. I picked the Dakota Fanning movie to watch yesterday.  WOW – I can so see myself in that movie.  The movie starts off with a mommy piggy having babies.  There is a runt – swallow – that the farmer doesn’t believe is going to make it so he is going to slaughter him until his daughter Fern adopts the little runt and names him Wilbur.  See, I was a runt.  What if they had done this to me?  I’m so glad mommy adopted me early in my life.

Wilbur grows up quickly and Fern has to let him go to live across the street in the barn at the Zuckerman farm, which is Fern’s uncle.  Little Wilbur is so alone and no one wants anything to do with him.  That is, until he hears a voice.  A kind and sweet voice from above.  Wilbur learns that the voice is actually Charlotte A. Cavatica (Charlotte for short) who is a spider.  They begin a friendship and some of the other barn animals let it out that a spring pig doesn’t get to see the winter snow.  Wilburn learns that his ultimate escape from being slaughtered at birth is something that is coming back to haunt him once again.

Charlotte comes up with a plan to write words in her web to show how much of a special pig Wilbur really is.  Charlotte gets Templeton (the barnyard rat) to help her out by gathering inspiration for messages in her webs.  This all leads to Wilbur being entered into the county fair in hopes of winning so he won’t be – gulp – slaughtered.  Charlotte and Templeton go with Wilbur to the fair and Charlotte does another amazing web.

This is the tear jerker part.  Charlotte is carrying babies.  She does this one last thing for Wilbur because she promised to help him.  She crawls up in the rafters and lays her egg sac which has her unborn off spring.  She dies and it’s up to Wilbur and Templeton to get the babies and bring them back to the barn.  OMP (oh my pig).  I’m crying as I type this.

Wilbur is spared being slaughtered but is so disheartened at the loss of his great friend Charlotte.  As time goes by, the babies hatch from their egg sac – 100’s of them.  They all fly away except for three that are named Joy, Nellie and Aranea.  The movie leaves off with Wilbur telling them about their wonderful mother Charlotte.  Not.a.dry.eye.in.the.Hotel.Thompson. my friends.  This movie is so touching.  One of my favorites.

Mommy said she would write “Some Bacon” in her web for me.  aaww – very sweet.

US Acres Cartoon – Oh So Funny!

Snort – While surfing the net, I have found the funniest comic strip ever.  It’s called U.S. Acres or outside of the United States it was called Orson’s Farm.  Mom didn’t even know this comic strip existed – it is a hoot!

The comic strip originally ran from 1986 to 1989 and was created by Jim Davis.  You know who Jim Davis is – the creator of Garfield 🙂  It ended after only three years.  Towards the end of the strip, Brett Koth, who had been assisting Jim Davis on Garfield at the time, was given co-creator’s credit and signed his name to the strip with Davis.

The entire comic stip is centered around – well you guessed it – barnyard animals.  Here’s one of comic strips that I absolutely loved –

The main character was Orson – a pig just like me!  Yeah, I know he’s pink and I’m a black pig but we’re still pigs.  And the best part – sometimes Orson becomes a costumed superhero named Power Pig.  See, I knew there was a reason I liked him.

There’s also Ray Rooster, Wade Duck, Booker, Sheldon, Bo Sheep and Lanolin Sheep to name a few.  If you haven’t checked this comic strip out yet, you just have to for some giggles!

Nope, can’t see them at all when they’re turned around.  Snicker Snort

I don’t know why I find this picture so funny!  I really want it for my bedroom.  Mom can put it on my wall – I just laugh everytime I see it.

Can you just picture farm animals actually doing this in front of their farmer?  I know I would!

And oh man – the talent of some people.  Who would have *ever* thought to do something like this and play with their food?  Give me 30 seconds with it.  I’ll enjoy the visionary aspects of it for 29 seconds and devour all of it in the last second – snort hee hee