I know you are asking yourself who in the world is H.H. Holmes and why is he being featured on my 31 Days of Spook?  The name sounds so plain and innocent.  But I assure, it is not.  You see H.H. Holmes is the common name of Dr. Henry Howard Holmes (who was actually born Herman Webster Mudgett – try to figure that out huh?)  H.H. Holmes is considered America’s First Serial Killer.  Does the name sound innocent now? 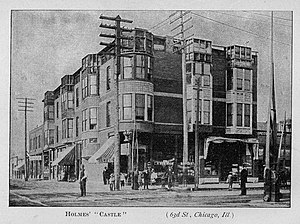 It starts out in 1886 in Chicago.  H.H. Holmes built a hotel right in town near all of the fair activities.  In the time that he was building it, he often brought in different construction crews to add things and then fired that crew afterwards.  Again the next day hiring a different construction crew to work on something else at the hotel.  That way, not one construction crew or person knew of the intricacies of the hotel.  What intricacies?  Well like 100’s of windowless rooms, doorways that opened into brick walls, stairways leading to nowhere, doors that opened from the outside and don’t forget the fun rooms.  The rooms that had soundproof walls and gas lines in them to asphyxiate the guests.  Or rooms that had walls covered with iron plates and blowtorches to incinerate guests.  Or the secret hanging chamber… or the basement where he would dissect, strip the flesh off guests and then sale their bodies to medical schools.  What a host huh?

The hotel was nicknamed the Castle by the people of the area and it was three stories and a block long.  The name of the actual hotel was called the World’s Fair Hotel.  Yep, you guessed it.  The hotel was right there in the same area of the World Fair in 1893.  Just think of all of the innocent people coming to  Chicago for the World’s Fair.  They see this nice, new hotel and check in thinking they are safe… and then they are never heard from again.  Thus in the end, the hotel was then called the Murder Castle.

In the end, justice was given to H.H. Holmes.  He was eventually caught and although he claimed to have killed 27 people, it is actually thought the count could be well over 200 people!  What’s even more interesting is that H.H. Holmes is even linked to the likes of Jack the Ripper.  Some people even think that they may be one and the same.  H.H. Holmes was actually in London during the killings of Jack the Ripper.  And of course, Jack the Ripper was actually a very clean cut killer – some believe that he had a medical background.  With all of the killing that H.H. Holmes did, I would think he would fit that bill.  Do you?