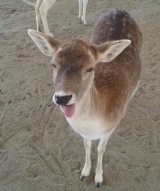 Dear Bacon – What?  Us reindeer can’t make a living only working one time a year at Christmas.  So what do we do for part time gigs?  Well I myself go from flea market to flea market taking pictures with the humans. Sometimes just for fun, I’ll stick my tongue out.  For some reasons, the humans love that.  Hey – it’s a living in between working for the fat dude.  Signed Donner

Dear Donner – You know I really never did think about what ya’ll did for the rest of the year.  I guess you would have to make some money during the year.  And hey, why not stick your tongue out?  I bet you make more money doing that, right?  Way to go my friend.  If you are ever near these parts, stop in for some treats. 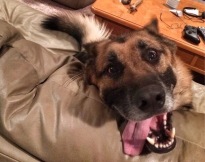 Dear Bacon – What has been seen can not now be unseen.  Why do the humans think they can run naked throughout the house when other humans are not around?  Are we not considered family?  Nobody wants to see that – put some clothes on.  And let me just say, just because other humans aren’t around, we don’t want to smell your farts either.  My gosh – what was that a motor boat??  Signed Shocked

Dear Shocked – WOW – it must have been a vision that can not be erased from your memory.  The look on your face tells me everything. And the run by motor boat, it had to be your dad, wasn’t it?  Shakes piggy head.  My dad does that too and then tries to blame it on me when mom walks in the room.  Dude, they ought to bottle that stuff up for hazardous materials! 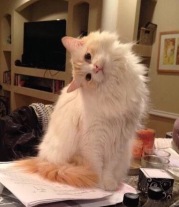 Dear Bacon – For some reason, I don’t think that humans are suppose to get up and then fall over.  I saw my mistress working at her desk, stand up and then fall over and go boom.  Her eyes were shut and everything.  I just sat here and watched… and waited.  Is it normal?  Do you humans just get tired like this?  Signed Watcher

Dear Watcher – Shakes head no.  I don’t think that is normal my friend.  Did she finally get up?  Maybe she was looking at the family budget.  Sometimes my dad’s eyes will roll to the back of his head when he looks at the budget at the end of the month.  Yeah – maybe that’s it.  For some reasons, numbers do that to humans.  I don’t get it either.  I mean what’s to budget for?  Just our food is important. 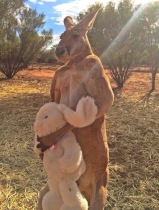 Dear Bacon – What?  Haven’t you ever seen a kangaroo with his rabbit?  This is my buddy Hopper – he’s my pal.  He never talks back and goes everywhere I do.  Sure my friends talk about me behind my back but they’re just jealous.  Don’t you have a friend too?  Signed Hopper Times Two

Dear Hopper Times Two – Who are other people to judge?  If you want Hopper around with you all of the time, so be it.  I have little friends around the Hotel Thompson that I count as my friends.  It’s no different.  You be your own kangaroo and don’t worry about what people say behind your back.  They are just jealous that they don’t have a close friend like yours.  Hop on and take care!

Dear Bacon – I’m just a sexy little feline trying to pay her way through cat school.  They only way I can make some money is buy working the poles.  I practice at home on the legs to any table I can find at home during the day.  Then at night, I hit the club and work my magic.  What do you think about this move?  Sexy enough for you?  Signed Magic Kitty

Dear Magic Kitty – Well, um, what can I say?  You have the moves like Jagger?  You can get into positions that I’ve never seen before.  But I gotta ask…. where do they put the money?

Dear Bacon – My mother thinks I’m always too mean towards my little brother and that I need to show him how much I really love him.  I can do that, I said, so I decided to give him this great big hug.  Do you believe he had the nerve to stick his tongue out at me and tell Mommy I was still being mean to him?  Apparently hugging gets you put in time out these days…. it’s not fair, I tell you!  Signed Cat Hugger

Dear Cat Hugger – You hugged him and still got time out?  The nerve of your human.  I mean look at the little guy – he is sticking his tongue out at you?  What about that?  Did your humans not see that?  You being all nice and him showing you the tongue.  I say this means war… of course don’t get caught again – snorts