Mom is the Woman at Shopping!

Oh my friends – I have to share a little something that my mom did recently.  If you are on mom’s Facebook, you probably already saw this.  But shaking my head, it was an awesome shopping deal.  And dad is right about mom.  I do believe that woman can make Abraham Lincoln squeal when it comes to working with coupons.  Keep reading to see what you think and you tell me.

Now mom shops at our local Kohl’s store, especially when they give you Kohl’s cash for the things you buy.  If you don’t know about Kohl’s cash, it’s awesome.  On certain promotional dates, you can receive $10.00 in Kohl’s cash for every $50.00 you spend.  Some people don’t like them while others like my mom can’t get enough of them.  At the end of April, mom had earned some Kohl’s cash.  She had bought several things that we needed for the Hotel Thompson – namely a certain coffee machine that does everything but sweet talk you when you use it.

Now, the big craze on television these days are the copper pans.  Mom has several of them here but there was a big one called the Copper Chef 5 had mom’s heart pitter pattering.  It was the big square pan with deep sides.  You can bake in it, fry, broil, saute, steam or braise food in this pan.  It comes with a recipe book, a fry basket, steam rack and lid.  On line with the copper company, you can get it for $60.00; of course Kohl’s had it for $80.00 – really?  Just shows you how they inflate prices, right? 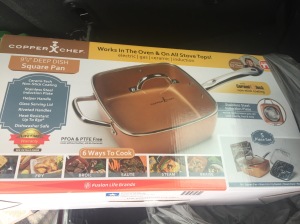 Then of course, there is the Copper Crisper.  Mom I think you need an intervention with all of these copper pans – snorts with piggy laughter.  This one, you can cook french fries and other items by putting them in a box in the oven.  Air circulates around the items and crisps everything up.  Kind of like fried foods but without all of the oil/grease.  And you know that’s important here in the south where we fry everything.  Now this pan costs $20.00 on line but has an $8.00 delivery fee; of course Kohl’s had it for $30.00 – again you see how they inflate prices. 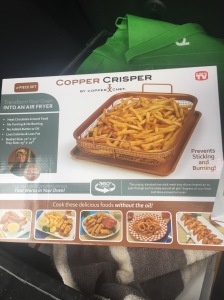 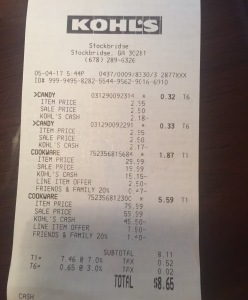 Now mom was stalking these two items at Kohl’s just waiting for the time period where she could cash in her Kohl’s cash.  Stalking is the right word.  Dad thought he was going to have to call in for additional help with mom.  You just don’t know my mom when she gets her mind on something.  Daddy says she’s very tenacious.  I’m not sure what that means but dad is serious when he says it.  So here came the date that mom was looking forward too for a couple of weeks.  Her and dad went into Kohl’s and mom went immediately to kitchen items getting the two boxes above.  Daddy just shook his head and laughed.  He knows mom way too well.  They then proceeded to the front line to check out.

Then mom has a Kohl’s card and belongs to the Rewards program.  For every $100.00 you spend, they give you back $15.00.  Well of course mom had one of those too – thank you expensive coffee machine.  So mom then used this rewards.

Then here came the topper.  Mom had $50.00 in Kohl’s cash!  These were also applied.  So what was the bottom line you ask?  I’m attaching the receipt so you can also see with your own eyes.  Daddy was so proud. 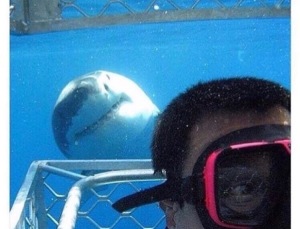 Dear Bacon –  There I was swimming around in my home.  You know, minding my own business and keeping to myself.  That’s when I saw this shark bait hanging out in a flimsy cage.  Ha – as if those cages are shark proof.  Shaking my head.  When will the humans learn, right?  Anyway, I was swimming and I saw this human with a camera thing taking pictures of my home.  Then the human did the weirdest thing.  He took one of those selfies that are all the rage over the internet.  Well, you know I thought I would help him out and swam up behind him at just the right moment.  By the looks of his eyes, I think it surprised him.  In fact, I’m pretty sure it did.  The water got cold in our area for a few minutes – ha!  Signed Sharky

Dear Sharky – Oh.my.piggy.heavens!   Dude, I would pee all over myself if you did that to me too!  In fact, that’s where us anipals are smarter than the humans.  There is no way we would put ourselves in these situations.  Shaking my head.  Nope, not at all.  That is one selfie he will not forget anytime soon for sure! 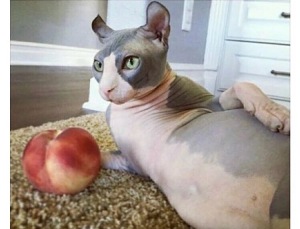 Dear Bacon – My master thinks this is a joke.  There is no joke here.  Just wait until he falls asleep which he has to do at some point.  Just wait.  What?  You aren’t laughing at me too.  Are you?  Putting a peach in front of me and saying there is more fuzz on said peach than my body is a cruel joke.  Just wait until a position that peach near his person.  Will see if his girlfriend thinks it is a joke.  Signed Evil Kitty

Dear Evil Kitty – WOW.  You don’t play do you my friend?  My dad says that this is called Game On and the master gets what he gets for doing something like this to you.  I would love to see his face… and his girlfriend… when you peach him back.  Talk about impeachment.  Snorts with piggy laughter.

Dear Bacon – See my friend sometimes one has to take help when it’s needed.  My girlfriend called and said she was home alone.  Rather than run the 3 miles to her house, I caught a ride in the back of a sweet dumpster truck.  They never saw me and never knew they had a hitchhiker.  Just remember fellow anipals, take help where you need it!  Signed Hitchhiker to the Galaxy

Dear Hitchhiker to the Galaxy – SWEET my friend.  What a brilliant idea to come up with in a time of need.  Of course that would be awesome to hitch a ride to get to your girlfriends house.  Hope you got there quickly!  Take care my friend and remember next time to buckle up! 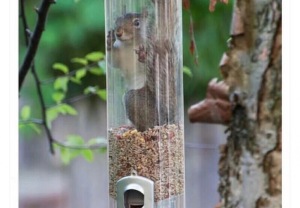 Dear Bacon – I have made a grand mistake.  Darn this birdseed!  There I was looking at the pretty seed and it was calling my name, “Squirrel come eat me.”  I ran to the top of the cylinder and looked into it blessing my lucky day.  That’s when this stupid bird came up and pushed me over the edge.  Now, I’m stuck in my prison.  It doesn’t matter if I eat all of the seed or not.  I’m stuck until a human sees me in my lockdown.  Why me?  Signed Squirrel in Solitude

Dear Squirrel in Solitude – Darn that bird!  Sometimes they can be so pesky.  I say this first hand seeing some birds in my magical backyard picking on you squirrels.  Wish I was closer.  I would certainly get you out of your predicament.  Hope you weren’t there too long.  It was definitely a catch 22 – you are near the food but trapped at the same time.  Then again, don’t eat too much.  You might not be able to get out! 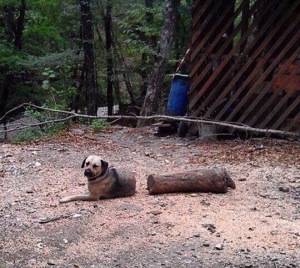 Dear Bacon – All it took was this one picture for my human to see and pass out.  I thought it was simply brilliant.  Really I do.  By quickly glancing at the picture, did you also think I was broken in half?  I got you, didn’t I?  HA – Barking my head off.  I think this is priceless.  Call me a magician for sure.  Signed Sawed in Half

Dear Sawed in Half – I have to admit it, you got me.  At first glance, I thought oh my goodness this dog is broken.  Even my dad saw it and thought the same thing.  Awesome job in fooling everyone for sure.  You should enter this in some kind of contest for sure.  Thanks pal now keep it together – snorts with piggy laughter.