Are You Brave Enough?

Oh sweet friends – are you brave enough for this awesome buffet for Halloween?  Do you have your costume ready?  This is the spread that our friends Kathy and John Chafin had at their Halloween party this year.  First we have to say bravo at the extraordinaire creativity in this ‘buffet arrangement’.  Kathy Chafin runs a family restaurant here in Georgia in Forest Park.  If you are ever in our area, (1) call mom/dad so they can join you and (2) go to this fabulous restaurant.  If you want to see more of their menu, hit them up on Facebook here. 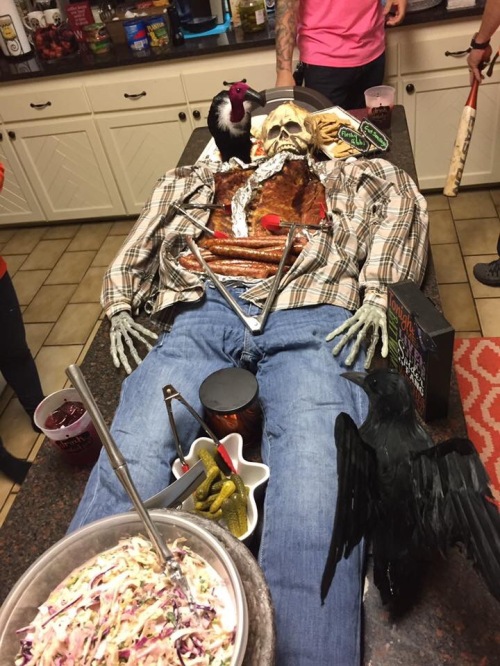 Tonight it’s raining hard in the cemetery.  I want to finish what I believe are some famously eerie and interesting cemeteries.  So put on your raincoat and straighten your spine.  Be prepared to be spooked!

When I think of places that a lot people died during a lot of fighting, one of the places that come to mind is Gettysburg, Pennsylvania.  Cemetery Hill had so many people that died during the Battle of Gettsyburg that it’s hard for me to wrap my mind around it.  There were so many bodies that it was hard to bury everyone in a timely manner.  You can imagine the smell that overcame the land.  There are still reports

today of people smelling death.  And you know what they say about unrested bodies, they become ghosts forever looking for redemption.

A famous cemetery that mom would like to visit is in Los Angeles, California.  (I know – she’s weird like that.  She finds walking through the cemeteries as calming as walking on a beach.  Go figure – she’s my mom.)  Hollywood Forever Cemetery is the final resting place of many celebrities over the years.   I’ll need to break down a listing of more important graves here later on in the month.  For now though, let’s concentrate on some hauntings of the cemetery.  A famous person known to haunt here is Clifton Webb.  People at the cemetery claim to hear voices and lights near the Abbey of the Psalms Mausoleum.  A story that intrigues me that I’ve seen on television numerous times is the crypt of Rudolph Valentino.  For years on the anniversary of his death, a lady dressed in black would be seen wearing a veil to cover her face at his crypt leaving a single red rose.  No one really knew for sure who this person was and still today the tradition of leaving a single red rose continues on his anniversary.

And I must end this stroll through the cemeteries at one of mom/dad’s most famous places in Savannah,

Georgia at Bonaventure Cemetery.  Did you know that this cemetery had the “Bird Girl” statue that is the photograph of the book Midnight in the Garden of Good and Evil?  I say had now because it has since been moved to a museum nearby but there are still some amazing tombs and headstones left.  Mom/dad have spent multiple days and hours strolling through and visiting with the folks still there.  One of the famous haunts is of little Gracie Watson who died of pneumonia when she was only six years old.  Currently they have her grave fenced off… is that to keep people from touching her little statue or from keeping little Gracie from touching you?   There’s also the hell hounds that local legend have talked about.  People claim to hear them snarling but no one ever sees them.  Perhaps they feel the hot breath of a dog on their ankles letting them know they need to step back.  You think?

So that ends our walk through the cemetery my friends.  Did you get chilled?  Did you get scared?  Perhaps you should check your shoes.  Mom did and this is what she found on her boots.

Halloween Challenge – Before and After… shivers! 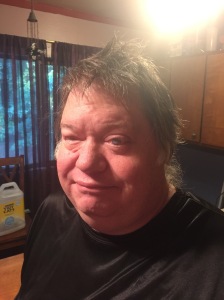 Welcome friends to my and Easy’s first Halloween Challenge of Before and After.  The challenge on this spooky Halloween is to post a picture of you before your day starts and after your day starts.  This was a fun challenge to show how much fun we can be.

Daddy thought he would go first.  So I took his picture of before he was presented for the day and after…. what?  Yep, dad looks the same.  Goofy man that he is what can I say?

Then mom did a series of pictures.  First straight from the bed with her hair pulled back… then with make-up and hair curled and then the final masterpiece.  Mom says show it with pride my friends!