Oh Dear – Mom Was in the Kitchen This Weekend

Yes folks, you read that right.  Mom was in the kitchen this past weekend.  That’s one of the scariest things that I’ve written all month – snorts with piggy laughter.

Mom/dad were talking Friday night and mom was determined to master the perfect popover roll or Yorkshire Pudding.  I have to say this about mom.  When she is determined about something, she gets head strong and focused driven.  This can be good and bad.  Good because if things don’t come out ‘exactly’ right, me and dad get them.  Sometimes what mom thinks are accidents can really be good to us.  But as mom says, practice makes perfection.  But mom saying she wanted to perfect these over the weekend even had our closet skeletons laughing.  They knew too that this would be a fun if not bumpy ride.

Let me preface this by saying that earlier in the week, mom made this popover rolls / Yorkshire Pudding perfectly.  Mom didn’t take a picture because (A) her and dad couldn’t get out of them long enough to take a picture and (B) mom was so shocked they came out wonderfully that she had to eat them.  So there we were Saturday for experiment 2.  This picture with two ‘popover rolls’ is not perfect.  They look wonderful but for some reason they didn’t ‘pop’.  They were dense and heavy.  Think Ellie Mae from the Beverly Hillbillies.  Mom says she could have hurt someone if she threw one of these at them.  Me and dad however thought they were awesome.  To us they were a little heavier than a biscuit but better than a roll.  See what I was saying about mom’s mistakes sometimes being our blessings?

But mom doesn’t give up.  If anything, mom is not a quitter.  Sunday was experiment 3.  Now, mom followed a recipe that she got from our great friend Bill , you know Shoko and Kali’s dad from Canadian Cats. (Thanks Bill – you rock!)  While mom waited, she fixed the rest of dinner which might I add was simply delicious!  Then the timer went off for the popovers.  She took the pan out holding her breath.  That’s when it happened.  The fat lady sung.  Birds started singing.  These were perfection.  Now the tin in the picture is deep so you can’t really see it but these ‘popped’.  They were nice and moist in the inside – empty and hollow like they are suppose to be. 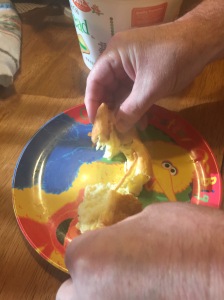 Dad couldn’t wait to try one.  He grabbed our fine china and a hot popover right from the tin.  He pulled it apart and do you see that??  Awesomeness all bundled up together as one.  They were that good.

So has mom perfected these?  We won’t know until she tries again.  This could have just been an accident.  Do your humans do this in the kitchen?  I’m off now – I think one of these bad boys are calling my name.  I’m going to see if dad will share with this oinker.

Hello friends – how was your week?  We held our own here at the Hotel Thompson.  From working so hard in the past weeks, we took this weekend to chill.  We turned off the phones, the computers and the iPad and chilled.  Mostly we watched television and cooked in the kitchen.  I have to say, I made some amazing meals this weekend.  I feel pretty good today – which is totally awesome for a change.  It’s finally started to get cooler here – this morning it was 46 degrees when I left for work.  It’s almost finally time to switch from flip-flops to the Ugg boots – YAY!

I’m happy to report that today is Monday and today I feel great.  My pain levels is probably around a 2 from my rheumatoid arthritis – that is excellent for a change!  Hopefully it is finally taking a turn for the better – it seems ages since I felt this good.  This week calls for more work and lots of errands to run next weekend.

So my friends, how was your week?

Today, I want to bring you tales of a creature that goes by many names such as Sasquatch, Bigfoot, Skunk Ape, Yeti and such.  Tales of this huge creature have been seen all over the world in remote places.  In the southeast corner of Georgia, Okefenokee has it’s own creature.  Here are some true reports from the Okefenokee X-Files.  Are you brave enough to read them?

The Okefenokee Swamp was truly a land of mystery in June 1829, when the Milledgeville Statesman published a bizarre story about it. The tale was related by a John Ostean, “residing on the borders of this swamp in Ware County,” and others who lived on the opposite side in Florida. Locals had long heard from Creek Indians of an enchanted island inhabited by “mortals of super-human dimensions and incomparable beauty.” The story goes that two men and a boy had taken advantage of a long dry spell and pushed deep into the swamp for two weeks to seek this island. However, “their progress suddenly arrested at the appearance of the print of a foot-step so unearthly in its dimensions, so ominous of power, and terrible in form,” that they paused. The print was eighteen inches long and nine inches across, the stride of this giant over six feet. The party hastily returned and spread the tale of the “Man Mountain.”

Hearing the story, nine Florida hunters ventured into the swamp. After several days’ journey, they found a similar print and others. The men followed the tracks for several days and had camped on a ridge when two of their members “simultaneously discharged at an advancing and ferocious wild beast” whose screams made the swamp “reverberate with a deafening roar.” The creature came “full in their view advancing upon them with a terrible look… Our little band instinctively gathered close in a body, and presented their rifles. The huge being, nothing daunted, bounded upon his victims, and in the same instant received the contents of seven rifles. But he did not die alone; nor until he had glutted his wrath with the death of five of them, which he effected by wringing off the head from the body.” The four surviving men examined the prostrate giant as it died, “wallowing and roaring. His length was thirteen feet, and his breadth and volume of just proportions.” Fearing the struggle might have alerted similar beings; the men gathered their comrades’ guns and fled for home.

A BOY AND HIS BIG FOOT

This report was forwarded to the Georgia Swamp Ape Research Center, GSARC and detailed an encounter in the Okefenokee Swamp. While a fourteen-year-old boy and his family were camping on the West side at Stephen Foster State Park in 1972, the boy was walking along a waterway when he heard footsteps behind him, drawing closer. He assumed it was his siblings. “I figured they were going to scare me, and I decided to let them sneak up and I would jump out and scare them.” Moments later “a thing that looked like a cross between a chimpanzee and a little man” approached along the path. “It saw me and let out a sound like from hell,” then crouched down and nimbly sprung on the boy. “It knocked me down and tried to get its teeth in (to) my neck. I screamed. I thought I was dead.”

Fortunately, the youngster’s parents heard the scream and shouted back. “It raised up real slow and sniffed the air for a few seconds,” he continued. “Then it just got up and walked into the canal and swam across to the other side,” disappearing into the woods.

THE PIG MAN A.K.A. SASQUATCH SIGHTINGS

It has been many years since a sighting, but old swampers would call him the South Georgia Pig Man. Over the years reported sightings have persisted in and around the South Georgia swamp areas, especially deep in the remote recesses of the Okefenokee swamp.

Reports describe the creature as a large ape like being, that walks upright, has abundant hair and a nose similar to a pig. Observers have commented on a skunk like odor that has accompanied the sightings. There have been no reports of hostility or aggression, in fact the creature was referred to as timid and shy with sad expressive eyes.

These Okefenokee area sightings have many details in common with creature sightings documented in the Everglades. A very similar missing link referred to as the Florida Skunk Ape. Could it be possible these beings are related genetically?

Before development transformed Florida, these man like creatures might have migrated. One of their routes could have been by way of the Kissimmee River Valley up along the Lake Wales Ridge to the extensive game rich swamps associated with the St. John’s River Basin.

The migration would have passed right by what is today the city of Jacksonville onward to the Okefenokee and beyond.

Who knows?  Maybe I’m related somehow in some fashion or form to this Pig Man?  It could happen… we could have matching snouts.

I want to send huge hogs and snout kisses to my friends Steve, Jo and their black cat Tequila at Okefenokee.   They gave me special permission to use their stories and pictures from the Okefenokee Pastimes Inc