We had great plans here at the Hotel Thompson this past weekend.  They required lots of rest and relaxation and most of all being couch potatoes while watching endless mind wandering television shows.  You know shows that are not to mind provoking or where you have to figure out who did it.  Television shows that you just watch and laugh carefree without having to use that mind… endless mind shows is what we call them.  Things went well Saturday.

Then Sunday the humans get up and turn on the television in the living room.  They hear a big BANG.  Mom looked over and the small cable box had popped and was smoking.  She immediately went over and pulled all of the cables out of the wall and television.  Okay, so maybe they watched too much television the day before?  Snorts with piggy laughter.

Mom gets on the phone to inquire about our cable store to see where and when they are opened today.  Guess what?  They were closed on Sunday.  What the cream cheese?  Really.   So Sunday was long, no television.  Do you know how old school that was.  I’m not sure who it killed more – mom/dad or us anipals.  I mean hey I can admit it.  I love my television.  So Sunday we did what we ‘use’ to do before television.  We talked.  We cooked.  We played games.  We rested together.  It was kind of awesome.

, mom took the cable box to the store and explained what happened to it.  They said it had happened to others and they were doing away with that type of box.  What?  Are you serious?  Something like this has happened before and you didn’t recall these types of boxes?  What if mom/dad had not been home?  What if was just us anipals and this happened?  Amazing customer service to boot huh?

So mom gets a new box (see picture) and was told all you have to do is plug everything in and there you go it works.  Mom of course rolled her eyes and said sure.  That’s when the great customer service told her, “Well we can come out to do it but it will be $75.00 for the service call”.  Really?!  That’s highway robbery.  Mom took the box mumbling some choice pirate words on the way out of the store under her breath.

Mom gets home and opens the box.  How cute.  The box says, ‘”Let’s get started”.  Of course mom did what no man has ever done.  She read the 3 page instructions first.  Then, mom had to move the giant television out and pull bookshelf/table out from the wall.  This in itself about blew mom’s inner strength.  Huffing and puffing, she gets everything pulled out so she can get behind the television.  Now, I’m on the couch minding my own business and watching the circus start.  Hemi then jumps behind the television to check things out.  Houdini tries to get in on the action.  All the time, mom is brushing them out from behind her war zone.

Mom gets the house phone and calls the cable company for tech support.  She puts them on speaker so she can have hands free for doing whatever t

hey tell her to do.  Now this is where America has went wrong.  She gets a customer service rep who is clearly outsourced somewhere other than the states.  She can barely understand him through his heavy accent but clearly him ask, “Is it plugged in?”  Really?  Now mom asks him in a very nice way could she talk to someone else who doesn’t have such a heavy accent.  Nothing wrong in that.  If you can’t understand someone, you are not going to get the help you need.  And, she wasn’t being mean.  Can you believe he was not so nice and
said a few words she couldn’t understand before transferring her.  What happened to customer service these days?

Phone gets transferred and picked up by another who immediately throws mom on hold.  Finally after 12 minutes, it is picked up again by another person with an accent .  But this time, mom can understand them more.  And of course the first thing they say, “Is it plugged in?”  Really?  Mom counted to 10 and said, “Yes.  I’m literate I can read instructions”.  Of course, the guy laughed so that eased mom down some.  Through the course of about 25 minutes, every thing was attempted.  Pings were sent to the box.  Programming was changed. New remote was set up.  Mom climbed behind the television.  She pulled lines.  She took everything out.  She put everything back the way it was.   She stood on one foot.  She touched her nose.  She prayed to the cable Gods.

Now, I know mom is not the only one that hates dealing with these things.  What about your mom?  If dad could, she would have so thrown it in his lap and said deal with it.  But we know she couldn’t.  And I guess this is better than waiting for the cable guy who never gets there on time and yes it saved us money because she did it… but, to what extent do you deal with things like this?  Do tell my friends to cheer mom up. 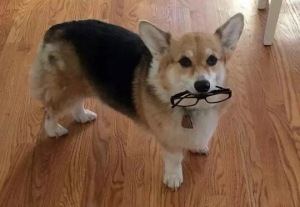 Dear Bacon – Dude, I hear you talking all of the time about having to do chores there at your crib.  I know you hate them but think of me.  I’m the glass carrier.  Yep, I think this picture says a thousand words.  My human is forever losing her glasses.  So I go behind her, find them and bring them to her.  My job is endless.  And please no smudges when you deliver the glasses.  The human already can’t see – Barks!  Signed Corgi Services

Dear Corgi Services – My friend – I am highly impressed.  And no smudges.  You are the finder of glasses and you keep your human on task by bringing them to her.  I must see if I can help my mom out too… she’s always losing her contacts…. I’ll try not to smudge them or swallow them – snorts! 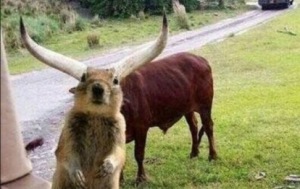 Dear Bacon – HA!  That’ll teach the old cow to try to outplay me in my own field.  He’s always getting his picture taken by the farmer and his kids.  “Look at the cow, he’s so cute”, blah-blah-blah is all I hear.  How about look at the squirrel and my powerful horns.  That’s right.  Those are my horns… not the stupid old cow.  Signed Bull Squirrel

Dear Bull Squirrel – WOW, those are some mighty big horns you have there.  It must be really hard with your every day life.  I can only imagine little things like just moving… or heaven forbid you should run.  I say you are a blessed little creature for sure and you have some mighty fine horns. 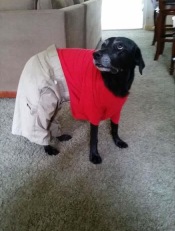 Dear Bacon – I don’t get it.  So I like to dress in clothes – so what.  So does a lot of other dogs.  But all of a sudden people are calling me names.  I don’t get that.  And they keep looking at me and saying, “Khakis?”  Well, yes khakis.  I think they make my legs look longer.  Please help me.  Signed Jake

Dear Jake – Give me a second dear friend.  Your name is Jake?  Really for sure?  I’m so sorry pal.  Can I ask who you have your insurance with?  Okay I’m sorry.  I digress.  You know you shouldn’t worry what people think about you.  It’s how you feel about YOU.  And Jake, if wearing khakis make you feel good about YOU, then go right ahead and do it.  I’m off now.  I hope that helps.  I need to make a call to my insurance company, State Farm.

Dear Bacon – Listen little guy.  I belong to a secret club.  It’s called the Loyal Order of Water Buffaloes.  We meet once a week.  You know to discuss important things that we have in our lives.  I can’t tell you specifics because well you know it’s a secret club for men.  This is my hat that I wear and then I do the secret shuffle and they let me in.  If you are ever in my hood, look me up and I will take you to a meeting.  Signed Grand Poobah

Dear Grand Poobah – Dude!  That looks so cool.  And a secret club with secret moves and knocks.  I am so there the next time I vacation in your area.  Count me in.  What do I need to do to get that awesome headgear.  I know I can rock it just like you!

❤ Friends – Please remember that Dear Bacon can’t happen without YOU.  Please continue to email me your letters/pictures ❤