Travels in the South

Today we finish up our tour of the World of Coca-Cola here in Atlanta, Georgia.  Last week, I left you with us visiting the awesome polar bear in residence.  He was such a hoot and so friendly!  We all had a blast playing with him – and I think he took a great liking to Jean.  I also think with enough soft whispers in his little polar bear ear, Jean might have been able to take him back home with her.  Then again, that would be a hard one to explain to Customs… you think?

After we finished with the polar bear, we went to explore a 4-D Theater.   The title of the film was The Search for the Secret Formula.  You got these really neat glasses to wear while watching the film.  Now remember we said 4-D. Thankfully, we went with Bill and Jean and got in the line of the non-moving section seats.  That was a most excellent move because let me tell you something, once you watch

something in 4-D you will be astonished.  The seats moved and rocked like you wouldn’t believe to the
movie.  At one time, water was lightly sprayed on the audience.  And with the glasses on watching the movie, people were ducking and dodging the things coming from the film.  You can’t miss this movie – you have to watch it and experience the 4-D effects.  Way to go World of Coca-Cola for this awesome show.

After the film, we were thirsty.  The bottles of free coke they gave us at the beginning of the tour were starting to wear off.  And hey, this was the best of time.  Now we were going to the Taste It part of the tour – something my mom couldn’t wait to try.  They had freestyle drink machines set up all over this room with over 100 different Coca-Cola drinks from all over the world.  You could taste as many as you wanted from anywhere – Africa, Asia, Latin America, North America.  Some of the drinks were:

So you see this was just a few of the different flavors from around the world that you could try.  Some tasted fantastic while others were like how do they drink this?  Afterwards, on the way out of the tour going into the store, you got a souvenir glass bottle of coke.

Now, the Coca-Cola store.  Some peeps – cough cough – had way too much fun in the store.  Bill was trying to find a good hat to wear for those cold snowy days and nights in Canada.  What do you think about this one my friends?

Do you think it would keep him warm?

Of all the hats to choose, this one was his favorite.  I kind of dig the polar look and the nose on this hat though.  I think it brings character – a fun aspect if you will. 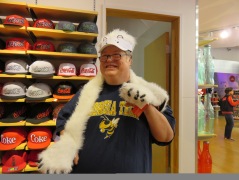 On the other paw, all of the kids in the neighborhood would be screaming for cover when they see daddy outside.  Look at the get up he went with – shaking my head.  These two.  What will we do with them?

So my friends, that concludes the tour of the World of Coca-Cola.  Did you have fun?  Did you learn anything (other than Jim and Bill are crazy?) that you didn’t know?

Stay tuned for next week to find out where these crazy peeps went to eat… and the GPS hang out that had everyone laughing.

25 responses to “Travels in the South”