Bashful Out and About

Oh friends – here’s another adventure that my little tyke Bashful had while he was home here at the Hotel Thompson in the past couple of weeks. We had quite a few people call and ask to go out with Bashful while he was home – we had a schedule of events – this is one of them.

Some friends wanted to meet at our local Red Lobster restaurant for a meet and greet.  When we finally got seated, our table section had a blue light over it and mom *had* to take a picture.

Daddy said that it should be fine as long as it wasn’t in a ‘red light’ district.  Shaking piggy head.  I didn’t get that joke but apparently mom did and she snorted.  I wonder where she gets that from?

So everyone huddled around our table looking at and discussing the menu options.  Of course, Bashful was right there in the middle of it all putting in his two cents of what he wanted to eat – you might as well just ordered one of everything – snorts. 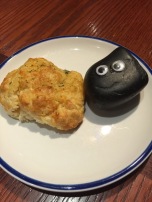 Bashful was really excited about going to Red Lobster.  He told me that he has fallen in love with seafood of any kind… a long with all kinds of other food.  What can I say?  The little bloke likes to eat.  I wonder where he gets that from?  Shakes head wondering.

Well, don’t you know the first thing Bashful did was jump on one of Red Lobster’s famous cheesy garlic biscuits.  They were hot and straight from the oven.  Mom told him to blow on it first because she didn’t want him burning his tongue.  Bashful told mom that some of his ancestors can withstand heat so he was fine jumping right in the biscuit and eating his way out. 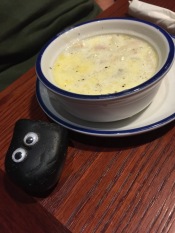 Then daddy had ordered some Clam Chowder.  And guess who had to take a chunky dunk into it to eat his way out?  Yep, shaking head.  You guessed it – Bashful.  I tell you for a small tyke, that rock can eat!  He said it was delicious.  Dad said he thought it was good but the only thing he got to taste was one single potato.  Thanks Bashful for sharing – snorts with piggy laughter.

Then, it was time to order the main entrees.  Now during this time at Red Lobster, they had their shrimp special taking place – it was all you can eat Shrimp.  One of mom/dad’s favorite times of the year for this particular restaurant.  Mommy couldn’t wait to taste her food.  She ordered succulent Shrimp Scampi – look at the size of those shrimp, fried shrimp and french fries well done.

Doesn’t that plate look awesome?  I have to admit it.  I licked mom’s iPhone when I saw the picture.  And I also have to admit that Bashful, of course, jumped right on mom’s plate and started gobbling like he had never eaten before.  I tell you my friends.  If I ate like that little guy, this little oinker would be 400 pounds!  But thank goodness it was all you can eat so mom could get some more since Bashful ate it all.  And hey you know what?  They brought me home a piggy bag – happy dance – shake your butt – happy dance.  Hope you enjoyed this little adventure with my guy.

14 responses to “Bashful Out and About”