Oh my friends – didn’t you get a chill just reading that title – dismemberment?  It does bring me shutters thinking about it.  You see this is a story that read about and heard on television.  I couldn’t believe my piggy eyes and ears!  I was shocked and ran to tell mom/dad.  They were in awe as well.

There was a man that lived in Tennessee.  Back in November of last year, he and his wife had a huge fight.  Things didn’t end well.  The fight escalated and the guy ended up killing his wife, dismembering her and putting her in their freezer in the garage of their house.  There she was for two days.

During those two days, the man kept thinking his wife was coming to him in his dreams about what happened.  He finally went and checked the freezer and she was alive!  They had a long conversation and she was telling him how much she loved him.  He was crying when he called 911 to come out and help her.

The police arrived to the house.  When they went into the garage, there was no way the woman could have been talking to the guy – she was dead and had been for several days.  Did she come back to seek her revenge? 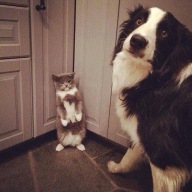 Dear Bacon – Nothing to see here.  Really there’s not.  I was just having a prayer meeting with Mr. Kitty.  That’s all.  Doggy Scouts Honor.  Signed Innocent Until Proven Guilty

Dear Innocent Until Proven Guilty – Oh wow my friend.  How could anyone think anything other than just a prayer meeting was going on in that picture?  I mean Mr. Kitty just would normally be cornered standing up straight with his hands down.  Now to think of though – if it was a prayer meeting, why wasn’t his hands up?  You gotta think about these questions that might come up.  And the look on his face – well that doesn’t say Amen to me.  I’m just telling you like I see it.

Dear Bacon – The humans came home early.  How dare them.  Don’t they know that once the leave for work, this crib is mine for eight hours or more?  Here I was taking a little dip in the inside pool.  They walked in like I was killing the pet bird or something.  Honestly, some people.  If they didn’t want me to swim in the pool, don’t leave the lid up.  Signed Skinny Dipping

Dear Skinny Dipping – Remind me not to get to close to your snuggles when I visit.  I don’t think that contraption is made for your swimming convenience.  I’ve seen what my daddy does in it.  It’s not pretty.  Trust me on that.  Shivers.

Dear Bacon – Can you believe my owner accused me of getting into her so called make up?  I did not touch her war paint.  No I didn’t.  You can’t prove these things.  She didn’t see me in it.  Hhummphh – I think I’ll go take a walk outside now.  Signed Painted Lady

Dear Painted Lady –  Uumm, you might want to rethink your stand on the no touchy of the war paint.  Go look in the mirror.  I think you will ‘see’ what is giving you away.  Although I do like the color of your paws and mouth, it looks like that lipstick didn’t get away.  One shade darker and it would look like a crime scene happened at your crib with you being the victim.  Of course on the other hoof, that would make an awesome Halloween costume.  Crime Scene or Street Walker – you make the call – snorts with piggy laughter.

Dear Bacon – This may look like shredded paper all over the floor but it’s not.  I have a perfectly good excuse for this.  You see my humans leave me in the kitchen while they go to make the money to keep me in the life I’ve grown accustomed.  Well, I’ve watched my mom clip her so called coupons all the time.  If you look closer at these papers, they are coupons.  I was just trying to lend a helping paw and help her out.  You know, to give her more time to pet and play with me.  You understand, right?  Signed Coupon Clipper

Dear Coupon Clipper – I give you one for helping and participating in the household budget my friend.  Unfortunately though, I don’t think those coupons will work the way you cut them.  I’m sure your mom understood your willing to help.  Maybe next time, you let her do the clipping with one hand while she pets you with the other.

REMEMBER my friends – Dear Bacon can’t help without your participation. Keep sending your letters and pictures to my email address.  Snorts and Oinks! 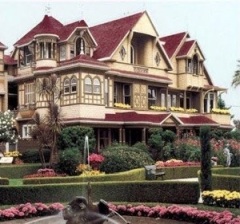 In 1862, she  married William Winchester – who came from the family that created the famous Winchester guns.  Everything seemed like it was grand and wonderful …for a while.

In 1866, the Winchester’s infant daughter, Annie, passed away from a childhood disease called marasmus.  (Marasmus is a form of severe malnutrition and causes a child to look emaciated.)  Losing her child caused Mrs. Winchester to fall into a deep depression.

In 1881, Mrs. Winchester’s husband, William, passed away from tuberculosis.  Can you imagine watching two of your very close loved ones pass away so early in life?  Mrs. Winchester was beside herself and sought help from a spiritualist.  Through consulting with the spiritualist, Mrs. Winchester believed her family and her fortune were haunted by the ghosts of the people who had fallen victim to the family Winchester rifles.  She was advised that the only way she could appease the ghosts was to move west and build them a house.  Not just a house but to continuous build them a house.

In 1884, Mrs. Winchester moved west to San Jose, California and bought an unfinished farmhouse .  Work began immediately.  Mrs. Winchester  would hold nightly seances to speak with the spirits to help guide her in how the house would be worked on the following date.  In the morning, she would meet with her construction workers and give them the plans.  Did the plans make sense?  You decide.

Construction continued every day around the clock until Mrs. Winchester died on September 5, 1922.  Upon her death, all hammering ceased.  When they looked in Mrs. Winchester’s safe they found the things that meant the most to her.  Not money.  Not diamonds.  Not riches.  It was two pieces of hair – one from her husband and one from her daughter.

And until this day, it is said that you can still hear the construction work taking place, that you can see the workers inside and outside of the home.  And, people still say that Mrs. Winchester herself is still in the home.