For all of these years, he had never thought about the box.  But one day, the little old woman got very sick and the doctor said she would not recover.

In trying to sort o

ut their affairs, the little old man took down the shoe box and took it to his wife’s bedside.  She agreed that it was time that he should know what was in the box.  When he opened it, he found two crocheted dolls and a stack of money totaling $95,000!

He asked her about the contents.  “When we were to be married,” she said, “My grandmother told me the secret of a happy marriage was to never argue.  She told me that if I ever got angry with you, I should just keep quiet and crochet a doll.”

The little old man was so moved that he had to fight back the tears.  Only two precious dolls were in the box.  She had only been angry with him two times in all those years of living and loving.  He almost burst with happiness.  “Honey,” he said, “That explains the doll but what about all of this money?  Where did it come from?”

“Oh,” she said, “That’s the money I made from selling the dolls”.

Barks my friends!  I do hope your week is going well.  Today I wanted to share with you some of my favorite toys.  No, I couldn’t just pick 1 as my favorite so I’m giving you the top 4.  Thankfully mom took all of these pictures at the store when she bought them for me at different times.

First up is tuggin’ tail pig.  Isn’t he awesome? ❤  He reminds me of Bacon somewhat… okay maybe not at all except that he’s a pig – barks!  This one was a neat toy.  You see mom/dad would hold the tail and I would attack the ball in the mouth of the pig… which seems kind of weird because all I could think of was it should have been an apple – ha!

Then there was skunk road kill.   He is cool.  He even has tread marks across his belly showing where he has been run over by some vehicle.  He is way cool and guess what – I still have him to toss around my kingdom here.  Can you imagine the creator of this awesome toy?  Riding down the street one day perhaps to work and sees road kill on the side of the road and says to himself, “WOW – that would make a great toy.”  Barks!  I think that would be hilarious.

Have you ever seen such a fantastic skunk?  Of course, he reminds me of Peppy Le Pew but way better now – barks!

What do you think?  Do you see the resemblance?  Sure you do… look for the swooshy tail and white stripes – of course mine has tread marks on it – ha! 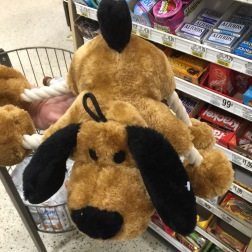 Then there is poochy.  He is also awesome – notice his rope legs that attach to his body and have paws at the end.  Mom/dad can hold a leg and I can grab the other legs for a festive tug of war challenge.  He was almost my favorite… notice I said almost.

Poochy is now called Waddles… why?  Because he has no legs.  They were pulled off by another dog… looks innocent.  What?  Isn’t that what he was for?  He still is a good dog.  I play with his body… of course minus the legs now.  I don’t have to worry about him running away from me – barks!  I couldn’t pass that one up my friends.

And he knows his commands like sit and stay.  Double barks.

But this leads us to my all time favorite toy.

Pirate Chicken.  Oh my dogs!  He is so very cool.  You see I had a pirate chicken before.  I loved him.  He squeaks differently and there is just something about that peg leg that drives me crazy.  He got destroyed right before we had the house renovation.

So mom/dad were shopping at the grocery store and finally found me a replacement.  Barks and does happy dance!!  I couldn’t believe that my favorite toy in the entire world was replaced.  I run around the Hotel Thompson with it in my mouth, throwing it up in the air, attacking it and shaking it all around.  It is totally awesome!

I feel like my entire life is complete now with the second coming of pirate chicken.  Do you have any favorite toys that you can’t live without?  Do share my friends.

Well that’s all for me my friends – yawns – I hope you had a wonderful week as well.  Happy weekend!