We Had a Funeral Here Today 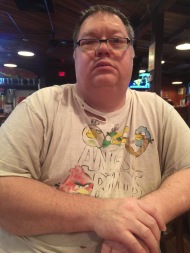 This is dad wearing his favorite Angry Birds shirt.  You might recognize it.  He does it wear it a lot.  Mom picked him up for dinner one night last week and he was wearing it.  When they got to the restaurant, she noticed it had a hole in it.  Do you see the hole in it near the neck?  She couldn’t believe he wore it out like that.  She kind of fussed at him.  What would people think?  She doesn’t clothe daddy?  Daddy told her not to worry about it because it was a holey but it was HIS special shirt, HIS lucky shirt if you will.

But today was a sad, sad day here at the Hotel Thompson. We had to have a funeral. For who? It was for dad’s favorite Angry Bird shirt. Mr Hole got worse and then it became several holes in the shirt.  Dad was wearing it around the house and refused to throw it away.  He told mom he wouldn’t wear it out again.  But now, it was time.

It was time to put dad’s favorite shirt to rest.  May it rest in holey heaven.   In honor of his favorite shirts passing, he hung up his other shirts at half mast.

Don’t feel too sorry for pops though. Mom knew this shirt was his favorite so she had a back up one ready for him as a surprise. Daddy was happy as Houdini with a new toy after that.

Do you have a favorite shirt or toy that you don’t want to give up?

This month we are highlighting something comical – not necessarily a toy – that happened sometime in your life that is hilarious.  Mom and dad have the perfect story that I’m going to share today.  Gather around my friends for a belly buster.

Let’s go way back – WAY, WAY back around 25 years.  Mom and dad had not been dating that long.  Mom had a Dodge Omni at the time that was less than dependable.  Lot’s of times, mom would go over dad’s house (who lived with his parents at the time) and have dinner.  After dinner, dad would drive with mom home and his parents would follow to bring him back.  They did this because her car just wasn’t to trusty.  She actually named this car Squeaky for a reason.  He would squeak all.of.the.time.  Kind of comical but mom was young and broke, still living at home with her parents trying to safe money.

So this one particular night was a late Friday.  It was dark outside and the same routine.  Dad would drive with mom so they could talk and dad’s parents would follow behind.  They always went the same route.  This one night though, dad’s parents got caught by the red light.  Mom kept going and broke down.  Squeaky took a huff and puff and just quit.  Mom got a flashlight out of the glove box and gave it to dad.  Dad had this scared look in his eyes and said, “What do you want me to do?”  Mom’s reply was priceless, “Hold the flashlight for me silly.”

So there they were on the side of the road, hood up, daddy holding the flashlight and my grease monkey of a mom tinkering underneath.  And guess who rolls up beside them?  Snorts – dad’s parents.  They started laughed hilariously because usually it’s the man working on cars.  But you see mom has lots of bigger brothers and her dad taught her the basics of car repair.  So dad’s parents are nagging him and laughing and that’s when it happened.  Mom told dad to get in the car and try turning it on.  There were doubts from daddy and his parents but guess what.  It cranked!

Everyone still laughs to this day that it would have been a perfect Christmas card – snorts.