Thank you so very much my friends for making Bacon’s Show and Tell a great place to be every month.  Last month was a snort in reading about everyone’s most hated toy while they were growing up.  Such hilarious moments indeed!!

This month for Bacon’s Show and Tell we are going to highlight a favorite or comical moment in your life.  It doesn’t necessary have to be a toy – it can be anything special that you want to share.  Your proposal of marriage – your graduation – your wedding.  Anything you want to share as long as it was something that was your favorite or it was comical.

Now is the time to tell us ALL about it.  Share it with us on Bacon’s Show and Tell scheduled for Wednesday, January 28th.  Remember to link your blogs to this one so we can all share. Mark your calendars and I hope to see you here my friends – oinks. 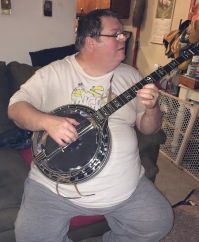 Oh my friends.  There were some fun times this past weekend at the Hotel Thompson.  What kind do you ask?  Let’s put it this way, daddy has many, MANY talents.  So this post today is for two reasons.  Here we go.

To the person on my blog that mom/dad are meeting next month – daddy is practicing his banjo music.  Snorts and rolls with laughter.  We hope you get the meaning to that.

To everyone else here on the blogs that have no idea who mom/dad are meeting next month, here is your first clue.  BANJO MUSIC.

Snorts.  That’s all I can say right now.  It’s going to be a blast though from what – I mean from what mom/dad say.

Those two words bring out the dreaded, “Oh no!” from a lot of people here in the United States.  They get the dreaded summons in the mail with a date to report to the courthouse for their civic duty usually at least a month in advance.  Mom got hers in December 2014.  But you see mom is not typical.  She wants to serve on a Jury.  You know like the one pictured – the bonus spot in the courtroom.  The story is though that she never gets picked.  Maybe it’s the questions you have to answer on the summons and send back in to the court system.  The questions range from have you ever been convicted of a crime to what you do/where you work for a living.  Then the summons tells you to report at 8:00AM on a certain date – mom’s was Monday, January 12, 2015.  And hey, don’t be late.

The line was out the front door of the building and down the sidewalk!  She waited for over 30 minutes and finally got to the check point.  She had to remove her shoes, cell phone, belt and put everything in a bucket with her purse to go through the scanner.  Well don’t you know the person behind the scanner saw something in her purse that had to be checked out.  Mom had a nail file that was not sharp by any means, was not metal, but could be construed as a weapon. Really?  Killed by being filed to death?  She was given two choices.  1 – voluntarily hand it over and she would NOT get it back or 2 – she could take it to her car and then get back into the long line again.  When I tell you mommy was HOT and steaming, that is an understatement.  She gave it up because she was already running late.  From standing in line, it was now 8:05AM.  She finally redressed herself, calmed her blood pressure down and went to the Juror room.  (Note:  This was not “just” a nail file.  It was a special nail file that she got from the beach – all pink and pretty.)  And Hey – if you are going to have these rules, why don’t you include in the summons the things you can’t bring to the courthouse.  Just a suggestion – snorts.

Once in the Juror room, she met her new 100 plus friends that she would be spending the week with.  There she learned about some new rules of Jury Duty from one of the eight judges here in the county.  These days, they hardly ever excuse anyone from Jury Duty here in our county.  There are exceptions but no

w if they excuse you, they automatically set you up in the system for another date before you leave.  They also advised that you were to wear your stickers stating you were a Juror, not to speak to anyone in the courtrooms or building and basically stay in this one room.  This one room by standards was a huge room but you put in 100 plus people and you can’t breathe.  It was advised this was a busy week and there were 8 judges with FULL calendars they were trying to clear.

Another new thing to the system is that when the judges were ready for a jury pool, a trumpet would play and then monitors around the room would roll a list of names.  If you were on the list, then you would go to the front door and get in line to be brought upstairs to the courtroom.  Sounds like fun huh?  Then everyone was sworn in for the civic duty and it was time to let the fun begin.

So this all on Mond

ay.  The trumpet went off four separate times that day.  And can you believe that mom was not on that list one.single.time?  But don’t worry about mom.  She came prepared.  She had her cell phone and she had her book that she was reading.  In fact, she read three books this week but I’m getting ahead of myself.

Day 1 of Jury Duty finally finished when everyone was dismissed at 4:45PM and advised to report back the next day by 9:00AM.  So my friends – report back tomorrow for mom’s next installment of serving as a Juror.