Thank you so much my friends for the help last week on Houdini.   I wanted to give you an update today on how he is doing with his teething here at the Hotel Thompson..  Some people suggested that we get him a Kong toy where you can insert a treat.  That way he can play with the Kong, chew at it and eventually get the treat.  Mom and dad thought this was a wonderful idea.  At this point – anything would be helpful as long as it’s not mom’s fingers or my tail!

Mom and dad went looking at our local pet store.  Mommy was fascinated at the different sizes of Kong’s, found one and handed it to daddy.  She asked daddy if this was small enough – what do you think?  Daddy said with this Kong, he could actually stick Houdini up in it!  Now wouldn’t that be hilarious… of course he wouldn’t do that.

Mom snapped this picture of daddy and showed it to one of their friends.  Their friends said, “Well, you could get that one, fill it with treats for your daddy and see what he does to get them out.”  Now *that* idea I’m kind of partial to.  It would be hilarious for us anipals to see what kind of hunting skills our old daddy has – snorts.

There were so many different sizes that mom and dad didn’t know what kind to get.  They discussed this with some friends that train dogs.  They actually came over to the house late Saturday night for a visit and brought Houdini a gift. 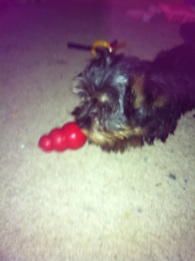 As you see from this picture to the left, they got the little guy a Houdini sized Kong.  It’s so small!  And I have to tell you, the little guy has skills of his own.  This Kong kept him busy for almost 45 minutes trying to get the treat out.  And, another plus.  He didn’t bite my tail.  That in itself is a God send – snorts oinks.  Thanks Brent!!

Also Brent recommended to mom/dad not having a gazillion toys down for Houdini at once.  They advised only having 2-3 down at any given time.  That way Houdini will focus on those toys and can be redirected to those toys when he gets the vampire mode that clicks.  So far, it’s worked.  We are *all* relieved here at the Hotel Thompson.

AND Houdini went for his final shots Saturday.  He officially weighs in at 3.10 pounds right now.  What a cow!