31 Days of Spook – Things that go Bump in the Night

Oh my wickedly spooky friends I do hope you are enjoying my 31 Days of Spook.  Today I have a true story from my mom and dad that took place right here at the Hotel Thompson.  I’m sure it’s enough to frighten you… maybe make you scream just a little.. or maybe like it did my mom – make you make water down your leg – snorts.  You be the judge my friends.  Happy spooky thoughts.

Last weekend, mom and dad said they were extremely tired.  I just thought it was maybe perhaps due to the new baby here, Houdini.  I mean he can be a little handful – so much energy that puppy has!  They went to bed much earlier than normal.  Us anipals understood and let them go their way.  That is until the screaming started.  Shivers – and there was a lot of screaming and noise.  But again as sometimes I get, I get ahead of myself.  Let me start over with my story.

It was around 3AM – the waking spook hour some say.  Mom had walked down the hallway to go to the potty.  You see mom has troubles with sleeping.  With having this problem when she does get up in the middle of the night, she doesn’t turn on the lights and she tries not to open her eyes anymore than she has to.  Heck, she knows the Hotel Thompson so it’s not like she should ‘bump’ into anything… or she thought.

Mom walked down the hallway, half asleep with her eyes closed and no lights on.  She got to the bathroom and reached for the door and it was open.  That was strange to begin with because we keep the bathroom doors here closed for a reason – because a certain snort oink kitty Mouse Girl likes to play with the water faucets.  But at last, mom thought nothing of it and went further into the bathroom.  That’s when it happened.  She touched an arm –

What the cream cheese?!  It woke all of us anipals up from the screaming.  What mom had not realized was that daddy had just got up and went to the bathroom himself.  He also doesn’t turn on lights – well for obvious reasons because of his vision – snorts.  She touched his arm in the dark and he freaked out – mom freaked out – and well let’s just say water made its way down mom’s legs.

So the next time you have to get up in the middle of the night for the midnight stroll down to the facilities, you might want to think about my mom and dad.  Maybe turn on a night light or hall light… I’m just saying 🙂

Today, October 2 is Name Your Car Day.  Whoever knew that there was actually a day to name your car.  Most people are in their car everyday, some several times a day.  What better way to give your car some character by naming it.  I mean why not?  People name their boats – why not name your car.  You have to admit that your car has personality.  Find a name fitting for its performance.

Bacon’s mom has named her cars over the years.  Here’s just a few of her names that she has used with the models:

Thank You and Help Please

Oh my friends!  What a wonderful thing that happened here last night at the Hotel Thompson.  I got mail!  Not an email but real goodness mail.  I was so piggy excited that I ran all over the house and couldn’t wait until mommy got home from the worky place to open the package.

It was the most beautiful thing in the world.  My ❤ just swelled up with so much love to my good pal Fozzie.  Why do you ask?  Well, she actually made me something with very own two hands.  It’s adorable – LIKE ME.  It’s cute – LIKE ME.  It’s priceless – LIKE ME!  It has an awesome bell on it that is so freaking cute!  I’m letting mom take it to work with her to put on her desk beside another great piggy that my Auntie Sharon made me a while back.  That way every single time mom looks at them during her stressful day, she will think of all of the love that went into making these and of course of ME!

And of course, mommy did a special thank you video to my friend Fozzie.  You can see that at the bottom.  NOTE:  Ignore mom’s southern twang – snorts. 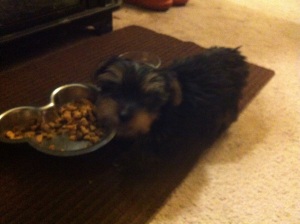 And now this is the part where I need you my friends.  As you know we have little Houdini here at the Hotel Thompson.  The little guy is going through some puppy teething kind of bad.  He wants to chew on everything – including my tail – snorts!  Any of you my good friends have any thoughts or suggestions on helping the little guy out?  Anything would be like most welcomed.  Mom tried the washcloth in the freezer trick – he turned his nose up at it and went for mom’s fingers instead – snorticles.

So – can you help this piggy out?  I know my tail and mom’s fingers would like great appreciate it so very much!

Hello my blogville friends – welcome back to my 31 Days of Spook.  Today and tomorrow I have a special treat just for you.  I met new some friends from Okefenokee – special hello’s to Steve, Jo and their black cat Tequila.  They gave me special permission to use their stories and pictures from the Okefenokee Pastimes Inc. – just in time for my 31 days of Spook.  Be prepared to be spooked, frightened and perhaps even sleep with a nightlight on tonight.  I know I have mine plugged in already 🙂

And Steve, Jo and Tequila – thank you so much from the bottom of this little pigs heart.

Friends, hold someone tight – these are true stories from not too far from the Hotel Thompson.

An Okefenokee area ghost tradition, this one dating to the 1930s, owes its existence to the railroad. A man fishing along the tracks at Henson Creek, near Manor, fell asleep one night with the rails as his pillow. A train appeared, sounding its whistle frantically, but there was no response. Steel wheels kept on rolling, and the fisher person was high landered.

Now for a twist. The legend is that the body can be seen walking the rails at night swinging a phantom lantern in search of its head. Kevin Dial claims that his grandfather went in search of the “shade” one night. Sure enough, it approached, solid white and six feet tall, walking directly toward Gramps, who fired a futile shot before fleeing.

A log cabin on Okefenokee’s East Side by an area called Camp Cornelia on Trail Ridge is where this haunting took place in the early 1990′s. A former Refuge volunteer, who resided in the cabin, reported strange visitations of Spirits. The Spirits were Native American Indians in full regalia. These spirits were not aware of the walls and boundaries of the cabin, but seemed attached to the land the cabin was on. They seemingly went about their daily tribal existence without concern.

SPECTRES OF THE SWAMP SIGHTING

This one was reported in January 1998 on Trail Ridge, the ancient geological feature which makes up the eastern boundary of the swamp. A traveler on vacation and hiking near the boardwalk area was surprised by the sound of drums in the distant piney woods. Native American spectres carrying objects and walking swiftly in a single file line were sighted off in the distance heading south on the ridge. The vacationer did not linger long to watch the procession. He reported no sense of hostility, but felt uneasy as if he was seeing something he should not be observing.