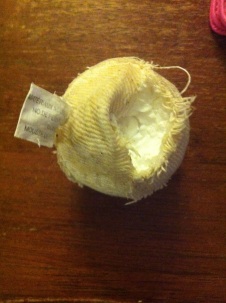 If I didn’t know first hand, I would swear that Houdini has been in contact with my brother Easy in France  Why do you ask?  May I present to you exhibit A to the left.  Yes, that is Houdini’s first destroyed doggy toy.  I’m not sure to feel happy for the little tyke on his total destruction or sad that his favorite ball is now gone like the wind.

You see, this *was* – and *was* is a good word – one of his favorite balls. Did I tell you that he learned to play fetch one day last week?  He would bring this ball to mom, she would throw it down the hallway and he would retrieve it.  Houdini and mom played this game for almost 30 minutes to an hour every night.  But now, the toy has went to ball heaven.

But don’t worry, mommy is buying him his very own miniature tennis ball tonight on the way home from her worky place.  Houdini will be back up in action playing fetch in no time!

So this contest is said and done.  First up – I want to thank EVERYONE that submitted emails and EVERYONE that voted.  We really appreciate that here at the Hotel Thompson.  There were some great emails sent and don’t worry – there will be more contests in the future 🙂

It was a very close race in the voting.  The top 3 according to the list were:

No. 1 WINNER – Samuel and Wallace!

Congratulations my friends.  South Africa is going to get their very own Elf on the Shelf.

Samuel and Wallace, please send me your address to send you your new friend.  You will need to name him before Thanksgiving.  Keep in mind, he is related to our Don Juan but who knows what his personality will be until after he receives his powers the day after Thanksgiving.  Don’t forget to post updates on him.  We will surely miss the guy here at the Hotel Thompson.

It’s hard to believe that it’s been 13 years but we will never forget.

No one will ever be the same after this date.

Let us not just think of the United States on this date.  Of the 2,977 victims that lost their lives on this sad day, 373 of them were foreign nationals that worked at the World Trade Center in different offices.

In memory of all of the victims that lost their lives on this sad day, you will never be forgotten.  You live on in our lives and always will.