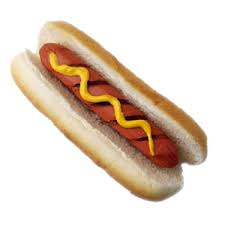 What better way to celebrate a holiday then to have an awesome eating competition.  I saw the Nathan’s Hot Dog Eating Contest last year on television and have been pigstruck every since.  I live for this competition!  Every year, this competition is held on Coney Island in Brookyln, New York on July 4th.  And, what better month to celebrate but in July when it is National Hot Dog month.  I would just *love* to be there to watch in person… and maybe compete.

Twenty competitors stand behind a 30 foot long table and chow down against each other.  They have a short ten minutes (which I’m sure seems like forever to them!) to eat as many hot dogs and buns as they possibly can.  A designated score keeper stands behind each competitor and keeps up with how many hot dogs/buns each person is eating by holding up a sign for each person showing the number of dogs consumed.

Here’s a picture of both of them –

Now I understand that competitor eaters are trained. But I have to tell you, I’m a natural born competitor eater.  Look at this body – I am *made* for this competition… of course with beef hot dogs.  I bet you I could do a big hurt on some of those dogs and at least tie Joey Chestnut.

I may have to venture outside into nature in the backyard when mom/dad grill our hot dogs this afternoon.  You know, just to see if any of them just ‘happen’ to fall off the grill.  Perhaps I can start my very own neighborhood eating competition for my four legged friends.  Who’s in with me?

Journalist Rocky the Squirrel –
Keeping my paws on the nuts of the world!

Today is July 4th – the birthday of our nation. On this day, we celebrate and enjoy the freedom that comes with the event that made this day so special.  Do you know how this date originated?  Here’s a little background information for you:

And here’s a little bit of trivia knowledge to WOW some of your friends.  The Declaration of Independence didn’t actually get all of the signatures by the representatives until August 1776.  The President of the Continental Congress, John Hancock, had to sign it to make it official.  Have you ever heard of the saying, “Put your John Hancock on it?”  Now, you know where the saying originated from.

Today we enjoy this day by celebrating our freedom.  It’s a time for some good old fashioned baseball, hot dogs and family picnics.  Throw in some parades and fireworks and it becomes a holiday with a bang!

P.S. My friends – mommy want to thank everyone for their emails, cards and comments yesterday. She had the bestest birthday ever! One that she will always remember.

And special thanks and love to Nana who took mommy out for her birthday lunch yesterday. It was so delicious and she LOVED her Mickey Mouse card. Love ya Nana!!