This picture is from Wikipedia.  It shows the typical seasons – Spring, Summer, Fall and then Winter.  That’s the way it’s suppose to fall.  But this year, dear old Mother Nature is not playing fairly.  Mommy says she needs hormone shots and daddy says she needs more dates with Father Time.  I’m not sure which one is right.  I just know that maybe she needs a kick in the butt.  Yep, I said.  I kick right smack in the middle of her captains quarters.

You see, this weekend is what I’m talking about.  Saturday here at the Hotel Thompson we get up and it is beautiful.  There’s no other way to put it.  The birds are chirping (and that’s a story for another time – snorts), the sun is out, the wind is just right and the temperatures are in the 60’s.  You couldn’t ask for a more gorgeous day.  Mom and me went out to wash her Smart car Albert.  It only took less than five minutes by throwing a cup of water at it – snorts.  I kill myself.

Our neighbor Big Daddy had cut our yard and the back yard was spectacular.  Thanks Big Daddy!  We went out there and ran for a while.  Mommy says it was for me to get some sun and I said I understood.  Secretly I knew she wanted me to run some excess Winter weight off so I would sleep more deeply tonight.  I’m good with that.  I just wonder why she didn’t make daddy do the same.  Double snorts.

It was a wonderful day.  Lots of running, loving and snuggles.

Then BAM!  What a change Sunday.  Sunday brought us rain, cool weather and strong winds.  We could actually sit inside and hear the winds!  We all got up and had breakfast together.  It was so damp and yuck outside that after breakfast, we all went back to bed.  Now, I’m not hating days like this because usually, like this day, when we go back to bed we all get on the Select Comfort for a siesta.  It was great.

Picture this.  A king sized Select Comfort bed with two humans, two purr things and a piggy.  Snorts, I’m a 65 with mommy on the Select Comfort.  Daddy and the purr things are a 100.  That’s just too hard for this little oinker.  When we got up from our nap, it was still yuck outside.

Now, I’m telling you all of this for a reason.  It’s suppose to be Spring but it still acts like Winter.  I’m suggesting a new season called – Sprinter.  You get it?  Spring with Winter.  So sometime today, tell someone Happy Sprinter.  Then smile and remember my little story here.  🙂

Oh My! Bashful is practicing up on his Ninja skills and is he drinking again? Snorts. You have to check this out on Auntie Sharon’s page. XOXO – Bacon

Such a simple little word – BOO.  Three letters that hold a lot of power and oomph behind it.  But, I’m getting ahead of myself snorts.  Let me start from the beginning.

Mommy has had a terrible time the past couple of weeks.  She went left and her back went right and it ‘popped’ out.  As she told daddy, her giddy up had a catch and I mean a BAD catch.  It happened on a Saturday about three weeks ago.  Mom and dad went to the market for their six month shopping trip which is an all day ordeal, store after store stocking up for half of the year to fill up the pantry and freezer.  It’s a blessing to do this but the day is LONG.  But secretly, I think mom and dad enjoy it to the max and have a 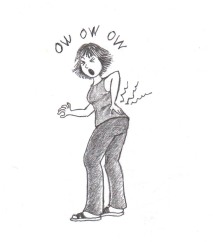 great time.  That’s my personal belief and I’m not hating the six month trip because this is the time they stock up on my treats to from the club house 🙂

At the end of the day though, mom was pooped.  Walking on all of that concrete all day long caused a nitch in her back.  It started off with a mild limp on her right leg.  Then it moved to her back side.  Mommy stayed on the heating pad on the sofa for a long time that weekend.

Come Monday,  it was still ouchie.  She went to her chiropractor for an adjustment several times that week but to no avail.  The pain was excruciating.  So much so, that daddy and me had to help her off of the couch.  Mommy said she felt like she was 102!  OMP (oh my pig!)

So finally she went to the regular doctor.  They gave her some medicine that she took starting the third week.  Finally – some relief!  She still had a hitch in her giddy up but now it was a small limp instead of walking like t-rex throughout the house.  All was getting better.  This past weekend, she was even able to get off of the sofa without assistance from me and dad.  I was going to get my mommy back – squeal!

So Sunday night mom tucked me into bed, told me my bedtime story and went into their room to get ready for bed.  There she was standing near her dresser and taking her night time medicine.  Daddy was in the bedroom with her and mom saw him – no biggie.  Then out of the blue – daddy said :

It wasn’t loud.  It wasn’t harsh.  It was just a matter a factly.  He does it all of the time – not a huge thing.  Usually mom would just say, “Is that all you got?” and they would just laugh about it.  But not this night.  I learned a couple of things this night.

1 – Mom can jump really HIGH for a girl.  I was amazed.  There’s no way I could jump that high – darn my pot belly – snorts.

2 –   Mom can take a joke and she laughed it off.  Daddy though – I have to admit that he was laughing so hard that he almost had water running down his leg.

3 – This is the most important.  Guess who is back to square one with their back hurting again?

I told you – my parents are ridiculous and that is saying it mildly.