Wordless Wednesday – All Pooped Out 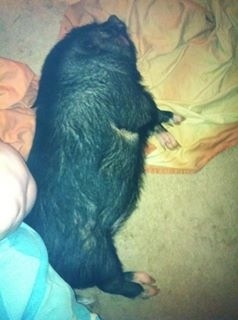 As you know, my pet rock Bashful has been traveling and has been visiting Misaki overseas.  He is currently on the way home and it can’t be a minute too soon.

At first, I didn’t know what the sound was so I layed in bed listening.  Then I heard it again, “Oh Bashful.” Then I heard lots of giggling.  WTP (What the pig) was going on?  I opened one of my eyes and looked over towards the rock clan.  It seems that Princess Coralena was having a dream about Bashful.  Oh Dear Lord.  I so do not need to hear this – snorts.

I got out of bed and stumbled over to her corner.  I gently woke her up and we talked about her dream.  It seems that Princess Coralena has really been missing Bashful.  She told that she had a dream about him and they were lost on a deserted island alone.  She painted quite the little picture for this oinker.  So much so, that I came up with this picture in my head –

I think Bashful may be in trouble when he gets home.  Now, he has two gorgeous rocks fighting for his attention.  That’s right.  I said two.  Princess Coralena was playing hard rock with him before not wanting to say she ‘liked’ him.  Then, he came home with Rockelle from Australia who was very up front with her feelings for him.  I do hope by the time Bashful gets home that he decides what is best for him with these two ladies.

What do you think he should do?  I really don’t know what to tell him as far as advice.