Last night was a regular routine at the Hotel Thompson.  Mom put me to bed, read me my bedtime story and I fell off to sleep.  Then her and dad got ready for bed – all of this typical of a regular night.  But as mom/dad were getting into bed and settling in for the night, I overheard something that they said.  It really piqued my interest and when I got up this morning I had to do some research on the internet.  That’s when the aaww factor came in.  Leave it to my daddy, he still has it at times. 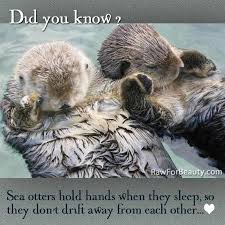 Are you wondering what daddy said?  He told mom, “Give me your hand my sweet otter so I don’t drift away.”  Then I heard giggles and then snoring – snorts.  It sounded so innocent but really weird.  What a strange thing to say before going to sleep.

During my research this morning, I found out what he was talking about.  Otters hold hands when they go to sleep so that they don’t drift off from each other.  There you go – you can do the ‘aaaww’ now.  I was touched beyond means.  Yep, my adopted daddy still knows what to say to make mommy weak in the knees… or go to sleep.

While at Tybee Island with mom/dad several weeks ago, Bashful went on a fishing trip.  You know that is one of dad’s favorite past times – to go fishing.  So, I guess that kind of rubbed off on the little rock.  He was so thrilled and was so full of confidence that he was going to get the ‘big one’ and it wasn’t going to get away… like it does in dad’s stories – snorts.

And then TUG – the line moved.

Bashful jumped into action and started reeling in the line.  He asked for some help from the regulars at the pier and a kindly gentleman came over to help him reel whatever Moby Dick he had on the line in.  It was touch and go for a while.  The line went out.  The line went in.  It was a monster!

Bashful stood his ground though and continued to pull in whatever was on the other end.  Was it a shark?  Was it Moby Dick himself?  Was it the Loch Ness monster?  Whatever it was, it was the longest twenty minutes of his life!   Then they saw something jump in the water.  OH WOW!

Man the net – man the pier – wipe the little rock’s forehead – the monster came out of the water.

It was touch and go for a while but finally the brought the big killer in – all in its glory.  What a fish!  It was amazing.  And to think dad, Bashful has ‘proof’ of his big catch… where’s your proof? snorts.

And being the good little tyke he is, after the ever so kind fellow fisherman helped out, they kissed it and threw it back in the ocean to his family.

When Bashful was asked why he threw it back, he replied, “It wasn’t big enough.”  aaww – that’s my rock!