I received an award that I have never gotten – the Dragon’s Loyalty Award – oh my!  I am flabbergasted.  I am in awe.  I am so happy my friends.

Here are the rules –

*ALL* of my friends deserve this award.  These are in no particular order.  Enjoy and share!

Gifts from Sleepy Hollow – Oh My!

Oh my! This little oinker has been excited – I mean full of excitement. I’ve been watching the television series Sleepy Hollow faithfully every week. It’s an awesome show! My friend Lori Fontanes at http://whattheducks.com/ posted that she was going to Sleepy Hollow in New York a while back. Of course, my ears and tail perked up – I wanted to go! Of course, with everything going on at the Hotel Thompson, there was no way. So Lori sent me something. 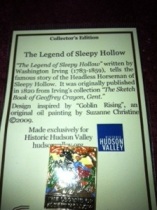 First I have to add that I am so sorry in taking time in saying thank you publicly. I did send you an email but I wanted to have the time to do a proper thank you in my blog my friend. With my 31 Days of Spook, mom/dad’s vacation and finding a pig sitter, let’s just say things at the Hotel Thompson have been a little chaos. Snorts – a little. That’s like saying it’s a little dark outside. Okay I admit it. It’s been CRAZY around here!.

You just don’t know how excited this little oinker was when he received an UPS envelope at the door. In fact, the UPS guy – Charlie – knew it was for me. I was at the door and just kept shaking my little tail so fast. He even bent over petted my head and told me it was for me. How exciting!

Mom took everything and hung up in my bedroom on my wall. I just love it! In fact a couple of days after I received this package, I actually got a sent postcard from Lori at Sleepy Hollow. I let mommy take that one to her worky place to hang on her corkboard with my picture 🙂 See, I share.

Lori, I can’t thank you enough my friend. I have been so excited looking at my map and now when I watch Sleepy Hollow on television, it seems so real to this little oinker! Thanks!! – I’m sending you loads of hogs and snout kisses!

Snorts – I also have to share a snort with you. Mommy was looking at the map and saw an advertisement for a restaurant. You know my mom/dad – the foodies – snorts. Mom got all excited about one place that was called “Build a Gut” sandwich shop. OMP (oh my pig!) We rolled around laughing at that for the longest time. I already have a gut to build – my pot belly – snorts. It was too funny… and my kind of restaurant! 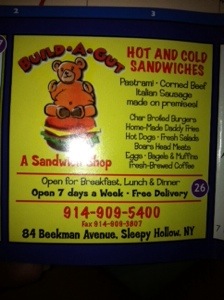 I’ve been a little late in getting some thank you outs and letting everyone know about Bashful.  It’s been crazy here at the Hotel Thompson my friends.  Please forgive me in my updates about my traveling pet rock.  Bashful spent some time in Virginia with Stuart at http://scottiechronicles.com/ .

Bashful actually got home the day before mom/dad’s vacation to the beach.  In fact, he kept us all up late into the night telling us of stories of visiting pigs, running away to a fair and watching Stuart ride a ferris wheel – I bet that was awesome!

He also spoke of getting into trouble with Stuart in his backyard and getting too close to the roadway – Bashful – shame on you! 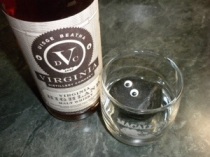 Poor Stuart – when Bashful first arrived, his humans were a little under the weather.  So I guess that accounts for some of the trouble they got into.

Bashful is such a sweet international rolling stone.

But, I’ve noticed that he has picked up some wicked ways in his travels.  Tomato weed bong smoking in France and now in Virginia scotch on the rocks.  My little rock is growing up so fast – at times I think way too fast!

Bashful came home in a box full of surprises much to my amazement.  There were note cards with scotties on them to remind us of Stuart, pig cards (aaww) and the cutest little pair of piggy salt/pepper shakers.  OMP (Oh my pig!)  Mom was thrilled and squealed like a little piggy herself – it was too funny.  I can’t begin to thank you enough for hosting my little pet Bashful.  He had the bestest time!  I really appreciate you taking him in like he was one of your own and showing him a great time. 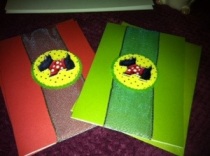 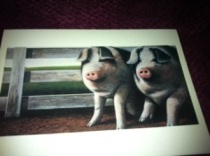 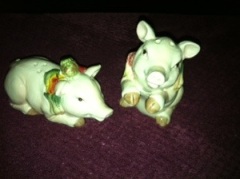 And you know, Bashful picked up a friend in his travels.  This is Virginia – check out those beautiful green eyes and red lipstick.  Everyone says that a girl can rule the world with red lipstick – I know she will here at the Hotel Thompson.  She’s already captivated Manny from France.

Thanks again Stuart my friend.  I’m sorry it took me a while to publically thank you. You rock! 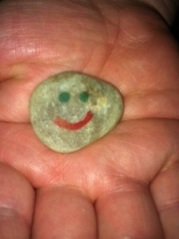 And where will Bashful end up next?  I will tell you that he was so carefully helped into mom/dad’s suitcase when they went to the beach.  Darn… okay I admit it – I helped him stowaway but that’s a story for another day – snorts.

Other than the beach, where will he go next?  His list is long here at the Hotel Thompson.  The next person has been notified and after a much needed rest this week, hopefully he will be put on an airplane this weekend.

My, where in the world will Bashful land?