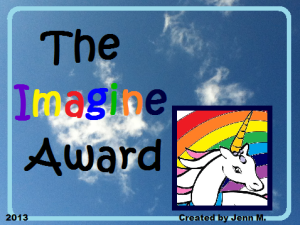 I am honored and so well…speechless (which is rare for this little oinker).  I have been bestowed the The Imagine Unicorn Award from my friends over at http://evilsquirrelsnest.com.  Thank you so very much!  I love awards and I love unicorns – what a match for me!  In fact, I secretly believe I have an unicorn in my magical back yard that poops the rainbow.  Sshh – don’t tell anyone, everyone will want one!

With everything being kind of crazy here at the Hotel Thompson for October, I have my little head deep in research for my 31 Days of Spook and missing mom/dad with their vacation.  They gave me this award on Sunday and I just don’t know what to say but thank you!

The Imagine Unicorn Award was created “in order to recognize the bloggers who express their passion and dedication towards their blogs through their creativity”.  It has six basic rules…. thankfully none of which involve answering any silly questions….

There’s a lot that I can say about evilsquirrelsnest.  First off, it’s highly original.  Who knew that squirrels could be so popular and lovable?  We at the Hotel Thompson think about evilsquirrelsnest often…especially with having that pesky Journalist Rocky the Squirrel in our magical backyard always knocking on the door for a cup of nuts – snorts.  Bill’s cartoons are a hoot, always makes us smile and even makes us ponder things at times.  Whenever daddy is feeling down, he *always* goes to evilsquirrelsnest to make him smile.  It’s just the way it is.  In fact, I’ve even told some of my skype friends about the nest – it’s a must read.  And mom, well she kind of basks in the posts from times of way back when.  Snorts – it’s a hoot down memory lane my friends.  Thank you so much for the kind gesture of thinking of this little oinker with this award.  I’m touched.

My nominees (in no particular order) – please accept my friends 🙂

Enjoy your award my friends – everyone deserves it!

Shivers – today’s post brings me shivers just thinking about it.  You’ve almost made it through with me the entire 31 days of Spook.  I’m so proud of you!