Ahoy, mateys!  Today, 09/19/2013, is International Talk Like A Pirate Day!!  It’s a day for fun – you know a day to let our inner pirate come out just for fun.  Practice your pirate talk and talk like a pirate all day long to everyone.  See how much fun you can have telling people to ‘walk the plank’… chitter chatter – so funny!  Just remember, it’s not required that you dress like a pirate as long as you talk like a pirate. 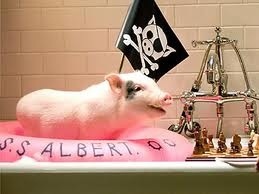 Avast, me proud beauty! Wanna know why my Roger is so Jolly?

Happy International Pirate Day me buckos!  Oh and by the way, here is a picture of Bacon where he dressed up like a pirate for Speedy’s party last weekend.  He went all Johnny Depp – snorts!