Today, August 16th, is National Tell a Joke Day.  YAY!  Today should be filled with chuckles and laughs all around.  Participate in this laughable day and tell some jokes.  Do it in person, pass it along in a few emails or blog about it.  The more jokes you tell today, the more fun today will be.  Start the laughter and keep it flowing.

In honor of this day, Bacon has decided to tell a few jokes that he has heard.  Get ready to laugh friends.

One of my neighbors owns several cats.  On a recent visit, she introduced them to me.  “That’s Astrophe, that’s Erpillar, that’s Aract and that’s Alogue.”

“Where on earth did you get such unusual names?” I asked

“Oh, those are their last names,” she explained.  “Their first names are Cat.”

–  Because pepper would make them sneeze. 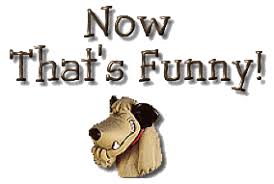 Why do seagulls fly over the sea?

–  Because if they flew over the bay they’d be bagels.

What do you get when you cross a flower and a dog?

Posted by Piglove on 08/16/2013 in Bacon, Journalist Rocky the Squirrel