My Mom’s Sense of Humor – She Still Has It!

Some people might have this kind of pillow perhaps lying around for fun.  You know the graphic of a little innocent outline of a pig with remarks about where is what for food.  Shakes my piggy head… just awful I tell you.  I mean I know I am walking food but do you have to leave a map to my dissection around the house – snort.  You really don’t need to give such ideas to visitors or to that purr thing called Hemi that stays here at the Hotel Thompson.

At the Hotel Thompson, mom has this kind of pillow lying around.  I think personally it makes for a better environmental talk of peace.  And, it’s all about how I really am on the inside.  You just have to look close and know that I am nothing but 100% loveable snuggable Bacon.

Which pillow do you prefer?  XOXO – Bacon 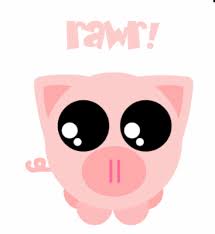