In some parts of the south, they tell you that your not officially a southern until you’ve had the basics.  The basics could be many things but some of them are collard greens, grits, sweet tea, fried chicken, sweet potato pie, macaroni and cheese and boiled peanuts.  I’ve had several of these things.  It makes sense.  My mom was born and raised in the south.  You know just between you and me they call people like my momma GRITS – Girls Raised in the South.  Snort 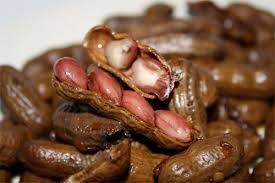 Well, mom let me try one of these things that I haven’t had…boiled peanuts.  Oh goodness – they are simply delicious.  And no, I didn’t have them in a RC Cola and no I didn’t have them on ice cream which is common here.  I had them straight up out of the shell.  mmm.  Boiling them just brings out a different flavor.  First of all, they’re soft so there is no crunch.  You boiled them in seasoned water right over an open flame.  Mom knows a guy that knows a guy that fixes them – LOL.  You break open a shell and juice goes everywhere.  Then you see the tasty little morsel.  You pop it in your mouth and it’s still hot from the flame – SHUT THE FRONT DOOR – the taste explodes in your  mouth.  It’s a little salty, sometimes it can be a little spicy according to the seasoning, and they are God’s tasty little morsels.

If you haven’t tried any yet, what are you waiting for?  Try them now and let me know what you think.  Dad never ate any until mom introduced him.  Now he can’t stay out of them.  They are that good!