So Fiddler Pig plays the fiddle and Fifer Pig plays the flute.  – puts my hoove to my head – how original.  They went the cheap way and made their houses of straw and sticks.  They did it quickly so they could play their lovely musical intruments all day long.  What a party that must have been!

Leave it to Practical Pig to build his house of brick.  He tried to warn his two little brothers who wanted to play all day but they didn’t listen.  They went on with their little jamboree while Practical Pig spent the extra money and time and built for the future not for the moment.

Then enter the big bad wolf.  Practical Pig tried to warn Fiddler and Fifer Pig but they didn’t want to listen.  That big bad wolf puffed and huffed and blew the house of sticks and house of straw down.  What did the brothers do?  Run to brother’s house to have him save them.  Of course, Practical Pig *always* has an exit plan.  Big Bad Wolf didn’t want to listen and tried his best to get in the house finally thinking he had a way through the fireplace.  I bet he was surprised when he dropped in for dinner and HE was the dinner! 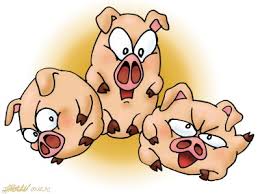 So, do you see the story in a different light now?  Do you understand my thoughts?  What are your views?  Please share – I’m all about having my Oprah moment.

Just One Thing to Remember This Long Weekend 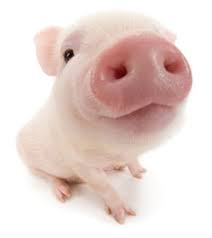 Take a good look at this cute little fellow.  See how adorable he is.  We are a special breed. We give love and ask for only ONE thing in return.  You ask what that is?  Think about me on this long holiday weekend. 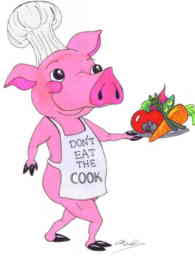 Eat those adorable cows from Chick Fil A.  They’ve let fame go to their heads already.  They’ve went Hollywood and forgot about their heritage.  Yeah that’s it – EAT MORE COW!